DR Congo’s government is leading what it calls “a state of siege” in two eastern provinces against armed groups who have killed, injured and exploited civilians. But what was first announced as a short-term measure that would enable government forces to better tackle those militias has since mushroomed into protracted martial law.

President Felix Tshisekedi declared in April that siege measures in North Kivu and Ituri would begin May 6, after a surge in attacks by armed groups that has killed hundreds of people and forced a growing number of civilians to flee their homes. The military and police was handed direct control over provincial authorities, replacing civilian leaders and administrators.

The emergency law was originally approved for a 30-day period, but it has since been renewed six times by the country’s National Assembly as government forces struggle against the armed groups. The Kivu Security Tracker, an organisation monitoring violence in three provinces of eastern DR Congo, says at least 1916 people have died in ‘violent incidents’ in the region since 2017, most of them civilians. Many of the deadly attacks have been led by the Allied Democratic Forces, a historically Ugandan armed group whose leader has declared allegiance to the Islamic State of Iraq and the Levant (ISIL).

Some provincial political representatives and analysts say army soldiers are ill-resourced and are not being supported by commanders. Civil society movement La Lucha says “the rights of citizens are increasingly trampled on”, and has called for the siege to end.

In this episode of The Stream, we’ll look at the experiences of people living under military control as DR Congo continues its fights against militia groups. 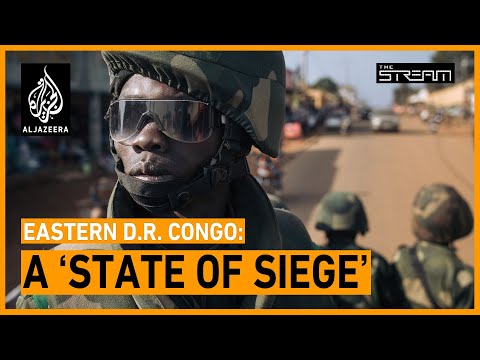 DR Congo’s government is leading what it calls “a state of siege” in two eastern provinces against armed groups who have killed, injured and exploited...