Ghana’s economy has been crippled by the pandemic, rampant inflation, the war in Ukraine and a depreciating currency. Now analysts warn that the country is close to a crisis.

In May the central bank governor said Ghana faced an overall balance of payments deficit of $934.5m in the first quarter of 2022, compared with $429.9m in the same period last year. Growth slowed to 3.3 percent in the first quarter of 2022 and inflation hit a record of 27.6 percent in May. Critics say the government has recklessly managed its finances with excessive borrowing. The country now spends about a third of its expenditures in just servicing debt alone, not including principal repayments.

In a U-turn from previous statements, this month the government announced it would hold formal talks with the International Monetary Fund (IMF) on a support package. This came just days after hundreds of citizens took to the streets protesting the mounting economic hardships. It is the second time in the past three years that Ghana has turned to the IMF for help.

Protests organized by the Arise Ghana group in June said they were against the “persistence and astronomical hikes in fuel prices by the Akufo-Addo/Bawumia government”, the “grabbing of State lands'' by government officials, and the introduction of a 1.5% tax levied on all electronic transactions. They are also calling for a full bi-partisan parliamentary probe into COVID-19 expenditures.

There is also dissent within the government on whether seeking assistance from the world body is the best move forward. Several unions have criticised the move saying it will create conditions that are unfavourable to Ghanians. One economist has said Ghana will become “ungovernable” if the IMF bailout requires wages to be frozen.

In this episode we’ll talk about Ghana’s worsening economic crisis and ask what IMF assistance means for Ghanaians. 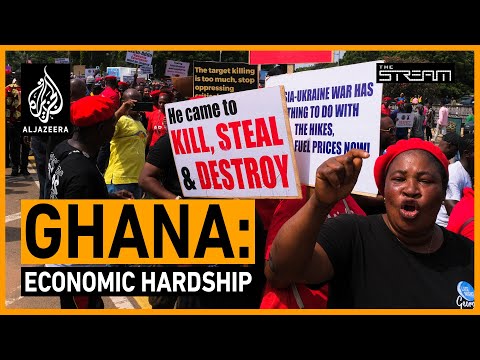 Ghana’s economy has been crippled by the pandemic, rampant inflation, the war in Ukraine and a depreciating currency. Now analysts warn that the count...