A 'state of exception' aimed at tackling gang violence in El Salvador is now in its third month, after lawmakers voted in favour of extending it once again.

The emergency measures, which are backed by President Nayib Bukele and legislators from his Nuevas Ideas party, have been in effect since March 27. They were introduced in the wake of a weekend in which 87 people were killed in gang-related violence.

Bukele and government ministers say the laws are needed to bring gangs to heel. The measures include restrictions on people’s right to assemble and allow authorities to hold people in detention without charge for up to 15 days, with the right to access a lawyer withheld.

While El Salvador’s Ministry of Security says more than 37,000 “terrorists” have been arrested by the National Civil Police throughout the state of exception, human rights groups say many of those detained are entirely innocent. Human Rights Watch and Cristosal are among organisations pointing to widespread evidence of arbitrary arrests and the abuse of people held in custody. One police union leader told Al Jazeera that officers have been put under pressure to make sweeping arrests as part of quotas and targets.

Meanwhile, a recent law authorising long prison sentences for those who disseminate or reproduce gang messages is making it harder for journalists and gang violence monitors to truly reflect on the gangs’ activities and impact – as well as cover the government’s response. El Faro reports that the weekend of gang violence in March and the subsequent state of exception stems from the collapse of a pact between the government and leaders from the Mara Salvatrucha (MS-13) gang. The government has denied the report.

In this episode of The Stream we'll examine the impact of El Salvador’s state of exception and what it means for communities affected by both gang violence and police brutality. 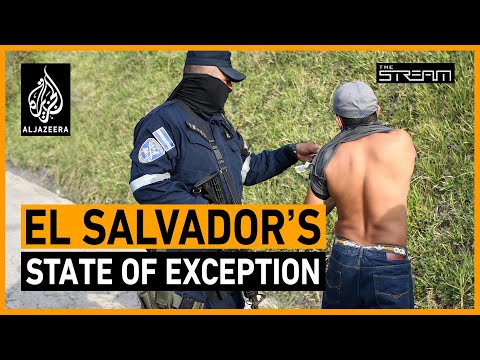 A 'state of exception' aimed at tackling gang violence in El Salvador is now in its third month, after lawmakers voted in favour of extending it once ...