???????? How are Ukrainian children affected by the war | The Stream

With the Russia-Ukraine war now in its second month, the conflict has reached a grim milestone: 4.3 million children - more than half of the country's estimated child population of 7.5 million – are displaced from their homes. It’s one of the fastest large-scale displacements of children since World War II. James Elder, a UNICEF spokesman, told Al Jazeera “every second since this war started a Ukrainian child has become a refugee – 55 a minute.”

At least 143 children in Ukraine have been killed since the start of Russia's invasion of the country and 216 wounded, Ukraine's office of the prosecutor general said on Monday in a message on Telegram. Tens of thousands more remain at risk of death or injury. Access to humanitarian aid is growing more difficult, while exposure to the conflict is having an impact on civilians’ mental health.

Mental health doctors in Ukraine say the sudden absence of fathers, forced to remain in the country after the government applied martial law banning men aged 18-60 from leaving, is harming children’s lives.

UNICEF also warns that children fleeing the war risk being trafficked. Traffickers often exploit the chaos of large movements of people, with children particularly vulnerable. And Russian forces have come under criticism for their treatment of children. The US embassy in Kyiv tweeted, “According to the Ukrainian Foreign Ministry, Russian forces have illegally removed 2,389 Ukrainian children from Donetsk and Luhansk oblasts to Russia. This is not assistance. It is kidnapping.”

In this episode we’ll discuss the toll of the war on Ukraine’s children, both inside and outside the country.

???????? How are Ukrainian children affected by the war | The Stream 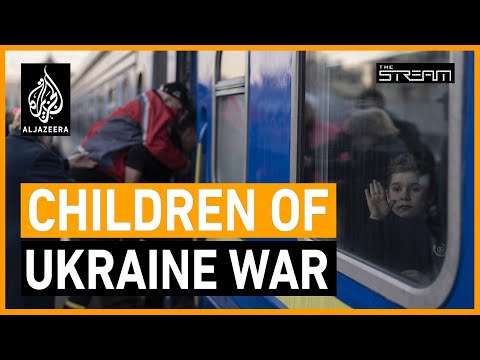 With the Russia-Ukraine war now in its second month, the conflict has reached a grim milestone: 4.3 million children - more than half of the country's...