As the year 2017 draws to a close, few following the events of the past 12 months would wager with certainty on how the coming year will unfold.

It was a year defined by unpredictability and the breaking of long-established convention, most noticeably in the form of the 45th US President Donald Trump.

The crowds at the Republican leader's inaugaration had barely dispersed before he set about forcing through the populist policies that saw him beat Democratic nominee Hillary Clinton just two months prior.

First on the agenda was the move to ban visitors from seven majority Muslim states from entering the US.

The order, which was introduced within a week of Trump taking office, prompted a huge outpouring of solidarity with those affected and large protests in the US and across the world.

Domestic policies were not the only area in which Trump left his mark.

In his first year in charge, Trump has refused to certify Iran's compliance with the Joint Comprehensive Plan of Action, the landmark deal between world powers and Tehran to curb its nuclear programme in exchange for limited sanctions relief.

Close US allies, such as the UK and France, warned against any action that would threaten the deal, but the US president chose not to listen.

Under Trump tensions have also worsened on the Korean peninsula, as a war of words between the US leader and the North Korea's Kim Jong Un, threatens to spillover into armed conflict between two nuclear-armed states.

But the US is not the only country breaking age-old diplomatic convention, particularly in the Middle East.

The fate of the Gulf Cooperation Council remains in the balance after three of its members, Saudi Arabia, the United Arab Emirates, and Bahrain, along with Egypt, broke off diplomatic ties with Qatar and launched a blockade of the country, which continues to this day.

The quartet accuses Doha of cosying up to Tehran and supporting "terrorists", accusations Qatar vehemently denies.

Since the accession of Saudi Crown Prince Mohammed Bin Salman, Riyadh has taken on an increasingly hawkish foreign policy, which has seen an intensification of the war in Yemen and the adoption of a hardline stance against its regional rival Iran.

The war in Yemen threatens to bring about a famine, which could put millions at risk of starvation, and shows little sign of ending soon.

Outside of the Middle East, the breaking down of the old order has been no less dramatic.

In southern Africa, former Zimbabwean President Robert Mugabe's reign finally came to an end after the 93-year-old leader was forced to step down by the army.

In Gambia, Yahya Jammeh, who ruled the country for 22 years, was forced into exile after refusing to accept his loss in the presidential election held in December 2016.

The year also witnessed a dramatic worsening in the plight of Myanmar's Rohingya people with hundreds of thousands fleeing a government crackdown on the majority-Muslim ethnic group.

The exodus began in August, when Burmese armed forces and their allies launched a military operation ostensibly aimed at Rohingya armed groups.

However, according to the Rohingya themselves and journalists and aid workers on the ground, the Burmese military was carrying out a campaign against civilians, which involved arbritary killings, rape, and the setting alight of homes.

The UN has described the situation as "textbook ethnic cleansing".

While the suffering of the Rohingya has earned a prominent spot on international news agendas, the US president ensured he would dominate towards the year's end with his decision to recognise Jerusalem as Israel's capital and move the US embassy from Tel Aviv to the city.

The decision drew opposition from Palestinians, Arab and Muslim countries, and western powers.

Tensions played out in the occupied territories as Palestinians turned out for daily protests against the US move.

Internationally, Turkish President Recep Tayyip Erdogan took a lead role in forming the Muslim world's response, by calling for an extraordinary meeting of the Organisation of the Islamic Conference.

That meeting, culminated in a declaration recognising East Jerusalem as the capital of the Palestinian state.

Later, Ankara co-wrote a non-binding UN General Assembly motion dismissing the US recognition of Jerusalem as Israel's capital "null and void", which 128 UN members voted in favour of and just nine voted against with 35 abstentions.

France, the UK, and other US allies voted in favour of the motion, earning a rare and indignant public rebuke from Washington.

The US Ambassador to the UN said: "The United States will remember this day in which it was singled out for attack in the General Assembly..." 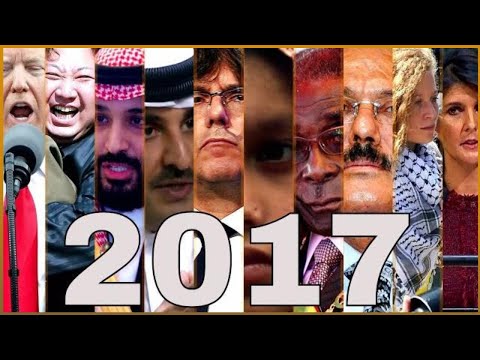 As the year 2017 draws to a close, few following the events of the past 12 months would wager with certainty on how the coming year will unfold. It wa...