The seconds saved (and lost!) during a pit stop can be the difference between a champion and a racer who doesn't place. If we playback a video of a NASCAR pit crew, we can see all the things they do precisely in an incredibly short amount of time.

*This video is about the 5 lug nut pit stop that is still used on the NASCAR Xfinity Series and the NASCAR Camping World truck Series.

PIT Instruction and Training has trained pit crew athletes for the sport of NASCAR since 2001. With nearly 70% of its eight hundred and sixty-five students having raced in NASCAR’s top three divisions, PIT has proven itself to be a high capacity producer of pit crew talent for the motorsports industry. Interested in taking the pit crew path? Call 704-799-3869 or email [email protected] for details on how to begin your new career in the pits.

Adam Merrell has been coaching pit crews within NASCAR since 2006 and has coached multiple stock car and truck teams since joining PIT Instruction & Training in 2007. He is a certified and licensed athletic trainer (ATC/L), and a certified strength & conditioning coach (CSCS) by trade, which has strengthened his knowledge in biomechanics and coaching to help place pit crew members at the highest level with championship teams.

Still haven’t subscribed to WIRED on YouTube? ►► http://wrd.cm/15fP7B7
Listen to the Get WIRED podcast ►► https://link.chtbl.com/wired-ytc-desc
Want more WIRED? Get the magazine ►► https://subscribe.wired.com/subscribe/splits/wired/WIR_YouTube?source=EDT_WIR_YouTube_0_Video_Description_ZZ

Get more incredible stories on science and tech with our daily newsletter: https://wrd.cm/DailyYT

ABOUT WIRED
WIRED is where tomorrow is realized. Through thought-provoking stories and videos, WIRED explores the future of business, innovation, and culture. 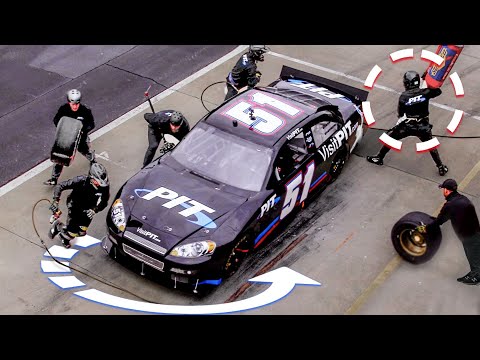 The seconds saved (and lost!) during a pit stop can be the difference between a champion and a racer who doesn't place. If we playback a video of a NA...