Al Jazeera, the Qatar-based media network, marks its 21st anniversary on Wednesday, amid calls by Saudi Arabia, the United Arab Emirates, Bahrain and Egypt for its closure.

This year's anniversary comes as Mahmoud Hussein, one of the network's journalists remains in an Egyptian jail for over 300 days.

Hussein, an Egyptian national based in Qatar, was detained while on holiday in December 2016.

He was accused of "incitement against state institutions and broadcasting false news with the aim of spreading chaos".

Al Jazeera has rejected all the accusations against him and calls for his immediate release.

'Al Jazeera cannot be shut down'
Hussein's detention was the latest in a string of arrests by authorities in Egypt and elsewhere, targeting the network's staff.

In fact, throughout the past two decades, Al Jazeera and its journalists have repeatedly come under attack for covering news stories as they unfolded.

READ MORE
Al Jazeera demands press freedom
Its offices have occasionally been bombed or shut down in many places, including in Kabul, Baghdad and Gaza.

Reporters have been killed covering war zones in Iraq, Syria and Libya, while others have been jailed or forced to leave their countries following death threats.

"This newsroom has transformed the media landscape the world over - but it's come at a price," Giles Trendle, Al Jazeera English managing director, said from the Qatari capital of Doha on the network's 21st anniversary.

"Many of the journalists here have friends or colleagues who have sacrificed a great deal for the sake of what they consider to be sacrosanct: the right of people to be informed," he added.

'Changed idea of free speech in the region'
In June, Saudi Arabia, the UAE, Bahrain and Egypt cut ties with Qatar and imposed a land, sea and air embargo, accusing it of supporting "terrorism". Doha has repeatedly denied the allegation.

One of the Saudi-led group's demands, in order to lift the blockade, is the shutting down of Al Jazeera.

READ MORE
An Open Letter from Al Jazeera
Doha has rejected that demand, insisting that it is the duty of governments to protect basic human rights as enshrined in the Geneva Convention, including the right to information.

"When you tell me to close a channel like Al Jazeera, history will write one day in 50, 60 or 70 years how it changed the whole idea of free speech in the region," Qatari Emir Sheikh Tamim bin Hamad Al Thani said in a recent interview with CBS' 60 Minutes, while reiterating that the fate of the network was not up for discussion.

Media outlets and press freedom groups, including The Committee to Protect Journalists, Human Rights Watch, Reporters Without Borders, the New York Times editorial board and The Guardian, have all condemned the efforts to pressure Qatar into shutting down Al Jazeera.


WATCH: Al Jazeera marks World Press Freedom Day (00:35)
It has since expanded into a media network with several outlets, including the internet, and news channels in multiple languages.

As one of the first Arab news channels, it soon became the most watched TV news outlet in the Middle East and North Africa.

Its non-stop coverage of conflicts and uncensored talk shows were unprecedented in a region where government control of the media is widespread.

Al Jazeera English was established in 2006 and has since won a host of prestigious awards from organisations around the world. 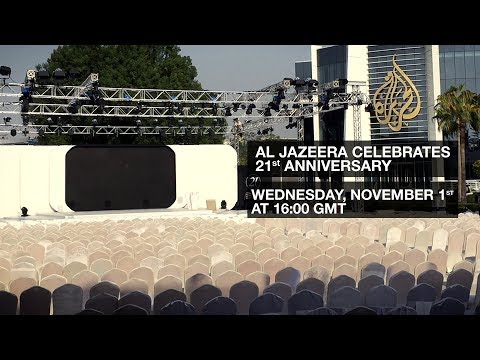 Al Jazeera, the Qatar-based media network, marks its 21st anniversary on Wednesday, amid calls by Saudi Arabia, the United Arab Emirates, Bahrain and ...