An Arctic Expedition: Recruiting the Next Generation of Climate Activists | NowThis

Robert Swan made history as the first person to walk to the North and South poles — after seeing the damage of the climate crisis firsthand, he’s dedicated his life to recruiting the next generation of climate leaders.
» Subscribe to NowThis: http://go.nowth.is/News_Subscribe
» Sign up for our newsletter KnowThis to get the biggest stories of the day delivered straight to your inbox: https://go.nowth.is/KnowThis

Rob Swan wants to empower us to care about and proactively protect the Earth from the growing dangers of climate change. However, he knows society doesn’t believe it can make a big impact on an individual level and is content with waiting for someone else to make the needed changes. Therefore, Rob has traveled around the world in an attempt to show people the power that one person can have once they decide to act—and has made sure to instill that same passion and confidence in his 24-year-old son, Barney. This year, Rob and Barney brought 86 people from 27 countries to the Arctic so they could get a firsthand look at the damage of climate change and be inspired to make tangible changes in their lives.

In mining, they used to take these little canaries in a cage, and then when the canary is collapsed off their perch, the miners would know: Get out. And the North and South poles are our canaries on the planet.

Thirty years ago, Robert Swan became the first person in history to walk to the North and to the South Pole, and the damage that he saw there from climate change convinced him that it was up to us to make a change for the future.

Since then, he's traveled around the world, meeting people one-on-one and convincing them to make small, sustainable changes that can make a huge impact on their local community.

So if anybody says, ‘Well, I wonder if global warming’s happening,’ try walking to the North Pole and you'll have to swim.

This year, Rob and his son Barney brought more than 80 people from 27 countries to see the Arctic's rapidly melting ice firsthand and to inspire them to bring that urgency back home.

I was able to tag along to learn more about the Arctic myself and meet these incredible, everyday people who took time off work or spent months raising money to be here.

This is it. We're heading north on the National Geographic Explorer, great group of people. It's all about solutions. That's what we're here for: climate solution. Ready for action, let’s get on with it.
Roughly 5,000 people applied for this year's Arctic trip, and only 86 were accepted. The participants who were accepted and able to raise the money needed ranged ages, jobs, genders, and environmental impact.

To make the biggest impact, Rob and his team brought the group to the Norwegian archipelago, or collection of islands, Svalbard. Norway is one of eight countries that overlap the Arctic Circle, making it one of the first countries to feel the impact of the North Pole’s changing climate.

I'm feeling so excited, finally get to go on the outside and see actually what's happening, what we are talking about for so long: the actual effects of climate change.

I feel very excited to go. I cannot wait to experience this for the very first time.

I was expecting colder weather, really. Yeah. I mean, it's like New York in the spring.

Every day we do these excursions to land, we go to landings in Svalbard, and I expected pure ice, pure snow. And I’m sweating. I’m pulling off my layers, and it's grassy and spongy and boggy. So it’s definitely not what I expected.

In the last five decades, Svalbard’s temperatures have increased roughly 40 degrees Fahrenheit. It's a change that staff on the ship say they've seen firsthand.

Footage in the Arctic Circle was filmed while on the ClimateForce: Arctic 2019 Expedition, which is conducted by 2041 ClimateForce and The Explorer's Passage. To learn more, please visit www.2041.com and www.explorerspassage.com.

An Arctic Expedition: Recruiting the Next Generation of Climate Activists | NowThis 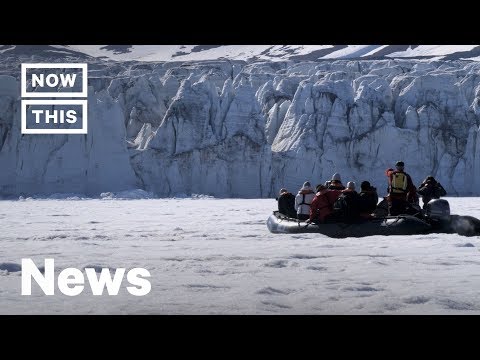 Robert Swan made history as the first person to walk to the North and South poles — after seeing the damage of the climate crisis firsthand, he’s dedi...