The long-awaited first official trailer for Marvel's "Avengers: Infinity War" is finally here. The Avengers will have to team up with the Guardians of the Galaxy to have any hope of taking down Thanos and his Black Order. The film is scheduled for release in May. Here are 10 things you might have missed:

1. Hulk returns to Earth, and it looks like he crashes through Doctor Strange's house.

2. Vision has taken on a human form and he may be in a relationship with Scarlet Witch.

3. A lot of the action takes place in Black Panther's Wakanda. Thanos may be after the country's vibranium, the same material used to make Captain America's shield. He could also be looking for an Infinity Stone in Wakanda.

4. This is the first time we've seen Spider-Man's spider-sense.

5. Spider-Man has a new Stark-issued suit.

6. Proxima Midnight, a child of Thanos, is seen. She's a member of his villainous Black Order

7. Captain America is back and charging into battle without his shield.

8. It looks like Black Panther is fighting a Chitauri, which means they weren't fully defeated in "Avengers".

9. Thanos is trying to take Vision's "Mind Stone". He already has the "Reality Stone," first seen in "Thor: The Dark World." He also has the "Space Stone," which may have been inside the Tesseract from "Avengers."

10. Thor winds up on the Guardians' ship, where Baby Groot has become a teenager! 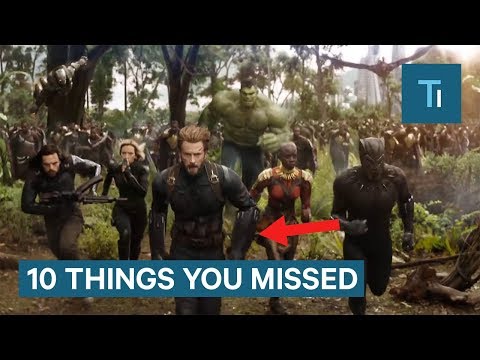 The long-awaited first official trailer for Marvel's "Avengers: Infinity War" is finally here. The Avengers will have to team up with the Gu...