Barcelona's Mayor: The city is losing its identity - Talk to Al Jazeera

A heavy footfall of 32 million tourists visited Barcelona last year. The city of 1.6 million is known around the world for its modernist architecture, world heritage sites, and its football team, referred to as "Barca" - but not everyone is happy about the high number of visitors.

Barcelona's appeal to foreigners and their money has led to rising property prices, making affordable housing incredibly difficult to find for the locals.

At the peak of the Spanish financial crisis, thousands were evicted from their homes for falling behind on their mortgage. Some protesters formed human chains around properties to prevent the city authorities from evicting homeowners. Ada Colau often led those protests.

Supported by her anti-eviction group, Colau decided to run for mayor of Barcelona, and against all predictions, she became the city's first female mayor in 2015. The activist-turned-politician promised to control the tourism industry by limiting the number of visitors, banning licences to build new hotels, and increasing taxes on vacation rentals.

But with tourism accounting for 14 percent of Barcelona's economy, can Colau reclaim the city for its residents? The mayor of Barcelona, Ada Colau, talks to Al Jazeera.

Asked about her history of activism, especially for victims of abusive mortgages, Colau says this is where Spain was hit the hardest and where it continues to suffer.

"The economic crisis in Spain is closely linked to real estate and the mortgage market. It's undoubtedly been one of the worst housing crises in Europe ... At the same time, instead of rescuing people, the state rescued [the] banks, which had cheated people with abusive mortgages and interest rates ... So there was a huge scam and the state didn't help the people, but rather the banks that had cheated and evicted people," says Colau.

On her controversial views on tourism, one of the most challenging parts of the Colau mayoral mandate, Colau claims this is in fear of another "economic disaster".

"When we came into office, we found an economic activity out of control ... For instance, tourist accommodation increased by over 18 percent in just five years. It was uncontrolled, extremely fast growth at the rate of a bubble, which is dangerous not only for the city but also for the economic activity itself."

A tourist tax is one of Colau's suggested solutions, "The city needs some kind of taxation system to offset all the services that the city's residents would have to pay for otherwise. The very point of a tax is to redistribute the wealth generated by tourism, or it would be the same old story: tourism generates a lot of profit, but it is very badly distributed."

You can talk to Al Jazeera too. Join our Twitter conversation as we talk to world leaders and alternative voices shaping our times. You can also share your views and keep up to date with our latest interviews on Facebook.

Barcelona's Mayor: The city is losing its identity - Talk to Al Jazeera 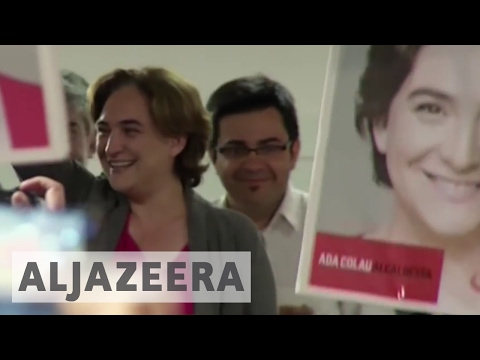 A heavy footfall of 32 million tourists visited Barcelona last year. The city of 1.6 million is known around the world for its modernist architecture,...