Bedouins in Oman: A foot in two worlds

As urbanisation creeps closer towards the desert, some fear that traditional culture is being left behind.
Sharqiya Sands, Oman - Leading towards the reddish, rolling dunes of Sharqiya Sands, the paved road gives way to a compressed dirt track, peppered on both sides with tufts of green scrub.

Deeper into the desert, the road disappears, but Humeid al-Meghairi knows the way instinctively. The 27-year-old Bedouin tour guide grew up here and now spends his days teaching foreigners about his family's traditional way of life.

Tour groups meet in the afternoon under the baking sun, where they stay in tiny huts made of palm fronds. They snack on bread cooked over fire, chopped up and mixed with milk and honey. In the evening, they pause atop the dunes to watch the sunset and sip strong Omani coffee.

"This life is special … At night, after dinner, it is quiet, and everyone joins in to see the stars and join the silence," Meghairi tells Al Jazeera, perched on a blue-and-red rug inside his family-owned Nomadic Desert Camp.

But the Bedouin lifestyle is changing. As modernisation creeps closer towards the desert and young people increasingly look to large urban areas for work, some fear that traditional Bedouin culture is being left behind.


Some Bedouins today make their living by giving desert tours [Wojtek Arciszewski/Al Jazeera]
Earlier this year, more than a dozen Bedouin families from the village of Asaadiyah in Oman were reportedly given 18 months to move to a nearby town and make way for the construction of a highway. Other villagers have publicly complained about the state's decision to build modern, low-income housing near their lands.

Amid this backdrop, more and more young Bedouins are voluntarily trading the desert life for urban conveniences and employment opportunities, observers note.

"Most of them are getting a better education, so they want to seek more stable jobs, and it's an easier life in the city compared with the hard life in the desert."

Searching for jobs
Some are even splitting their time between the two worlds. Hamad al-Hashemi, a 27-year-old Bedouin journalist who works for a state-run Omani media outlet, spends five days a week in Muscat and returns to Sharqiya Sands each weekend. It is a three-hour drive each way, but he has grown used to the commute.

"It's very important for me to be here every week, because this is where I was born, and I can't let this go. This life, my family and my friends are here," Hamad tells Al Jazeera, noting that the only jobs available in the desert are "camel-herding and camel races, cultural-related jobs".


Hamad al-Hashemi works in Muscat during the week and returns to Sharqiya Sands each weekend [Wojtek Arciszewski/Al Jazeera]
Meghairi, who holds a bachelor's degree in engineering, acknowledges that although he enjoys the desert life, he may also be forced to look towards the city for work in the future.

"There are not many jobs in the desert, and [Bedouins] need many things that they cannot find in the desert, so they move a little closer to the town to get better jobs, and also specifically for school for the kids," he says.

Bedouins have traditionally raised camels and goats to make a living, travelling from one spot to the next while following the water and grass. "But today, it's not enough, because in the desert there's less rain, less grass, so they have to buy everything from the town - and what they get now from the animals, it's not enough," Meghairi adds.

For his part, Hamad believes that the foundation of the Bedouin lifestyle is strong enough to withstand the threats of modern encroachment.


'Urbanisation will keep affecting this lifestyle negatively' [Wojtek Arciszewski/Al Jazeera]
'They hurry for the new life'
But Khalfan, who spent years travelling the country to collect artefacts of Omani and Bedouin culture, is not so certain. He cites the government's provision of modern housing and subsidised water and electricity, which has led many Bedouins away from their roots.

Bedouins in Oman: A foot in two worlds 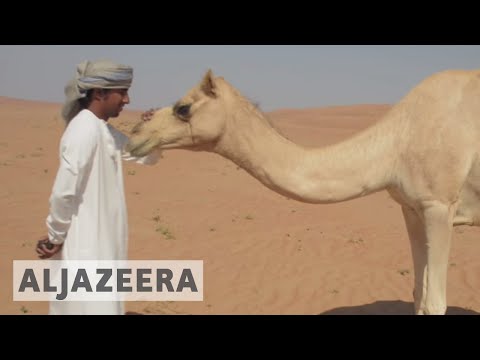 As urbanisation creeps closer towards the desert, some fear that traditional culture is being left behind. Sharqiya Sands, Oman - Leading towards the ...