Sen. Bernie Sanders, Rep. Pramila Jayapal, and other members of Congress hold a press conference to reintroduce the Raise the Wage Act
» Subscribe to NowThis: http://go.nowth.is/News_Subscribe
» Sign up for our newsletter KnowThis to get the biggest stories of the day delivered straight to your inbox: https://go.nowth.is/KnowThis

Sen. Bernie Sanders (I-VT), Rep. Pramila Jayapal (D-WA), and other members of Congress hold a press conference to reintroduce the Raise the Wage Act. This legislation would increase the federal minimum wage to $15 an hour over the next four years, increasing pay for nearly 32 million workers across the country. A form of this legislation was passed in the House in July 2019, but then-Senate Majority Leader Mitch McConnell blocked a vote on it. Now, with a Democratic majority in the Senate and Pres. Biden in the White House, Congressional leaders hope the bill will become law.

‘We’re looking at terrible levels of unemployment. We’re looking at growing income and wealth inequality. What concerns me as much as anything is that half our people are living paycheck to paycheck,’ Sen. Sanders has said. ‘For me, it’s morally imperative that we raise the minimum wage to a living wage that’s at least $15 an hour.’ Last week, Biden signed an executive action taking a first step to implementing a $15 minimum wage for federal employees and contractors. The order requires the Office of Management and Budget to come up with a roadmap to make the increased wage proposal a reality. 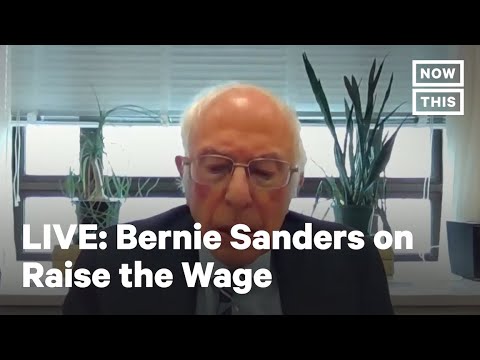 Sen. Bernie Sanders, Rep. Pramila Jayapal, and other members of Congress hold a press conference to reintroduce the Raise the Wage Act » Subscribe to ...