Trump’s pick to lead the EPA refused to affirm the scientific community on climate change — and Bernie wasn’t having it.
» Subscribe to NowThis: http://go.nowth.is/News_Subscribe

Bernie: Trump has indicated his belief that climate change is a hoax, perhaps perpetrated by the Chinese. Do you agree?

Bernie: The President has said that climate change is a hoax. Do you agree with him?

Wheeler: I have not used the hoax word myself.

Bernie: Leading scientists around the world, looking at many many hundreds of reports, have indicated that we have 12 years in order to stop the worst impacts of climate change and what they are talking about are rising sea levels, more drought, more extreme weather disturbances, more wildfires, more migrations of people. Do you agree with the scientific community that climate change is a global crisis that must be addressed in an aggressive way?

Wheeler: I believe that climate change is a global issue that must be addressed globally. No one country can —

Bernie: That wasn't my question, sir. I don't have a lot of time and I would appreciate if you're answering the questions. The scientific community has said that climate change is one of the great crises facing our planet and if there is not unprecedented action to transform our energy system away from fossil fuels to sustainable energy and energy efficiency, there will be irreparable damage in the United States and in virtually every country on earth. Do you agree with the scientific community?

Wheeler: I would not call it the greatest crisis, no sir, I I consider it a huge issue that has to be addressed globally.

Bernie: I found it interesting, Mr. Wheeler, you are the nominee to be head of the Environmental Protection Agency. You just in your opening statement did not mention the word climate change. Now how does that happen that the nominee to be head of the Environmental Protection Agency does not mention the words climate change at a time when the scientific community thinks that climate change is the great environmental crisis facing this planet. Should the American people have confidence that you are going to help us deal with this global crisis? The scientific community tells us that we have a crisis and that we need unprecedented action to dramatically reduce carbon emissions, not only in this country, but around the world. Now we are the strongest economy in the world. And if the leadership of the Environmental Protection Agency in the United States says to China and to Russia and to India and to countries all over the world that we have got to move aggressively to protect this planet
for our children and our grandchildren, we can have some impact on the entire international community. Are you prepared to do that?

Wheeler: I am — we are implementing the laws that Congress has passed.

Bernie: But you are the leader. We need you to come here we —

Wheeler: We will implement those.

Bernie: Well, that's not what I'm talking about. We have people over here who do not believe that climate change is even real. But you are the nominee for the leadership of the Environmental Protection Agency. Will you provide the leadership in this country, and the world, to say that we are concerned about the future of this planet for our kids and our grandchildren?

Wheeler: We are concerned about the future of this planet for children and our grandchildren.

Bernie: Is rising sea levels a concern? Or is that a hoax?

Wheeler: Rising sea levels is a concern and we believe in adaptation and we are looking at a number of things —

Bernie: But you want — here’s the point: We have people who don't believe in climate change, but you are going to be the leader, perhaps, of the Environmental Protection. 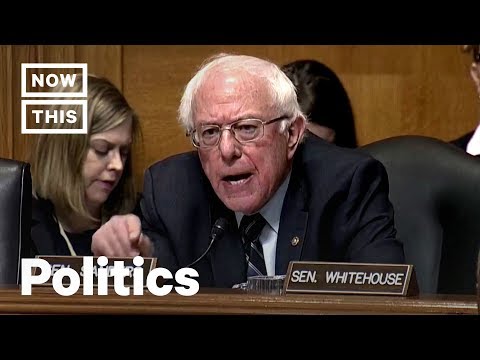 Trump’s pick to lead the EPA refused to affirm the scientific community on climate change — and Bernie wasn’t having it. » Subscribe to NowThis: http:...