Bizarre Discoveries In The AMAZON That Scientist Can't Explain

BIZARRE DISCOVERIES In The Jungle That Scientists Couldn't Explain

Humans like to think they are smart and have all the answers. Yet, the world is a pretty big place and there’s a lot of it we still have to explore. Today’s research trip sees us heading into the massive Amazon rainforest. It’s home to countless species of plants and animals, as well as an area filled with relics from ancient civilizations. All of this has combined to hand us a string of discoveries that seemingly leave more questions than answers.
We’ll start things off with Mother Nature and a strange species of spider that builds even stranger decoys in its web. Scientists are still trying to iron out what the original Stonehenge was used for. As you can imagine, when similar designs were discovered in the Amazon it really got people talking. A strange book and a lost city are the things of legends. Yet, deep in the forest in Ecuador an ancient city has really got all the Indiana Jones’ out there talking. A river that boils and isn’t near any known volcano? Locals may think it is witchcraft but surely there’s a logical explanation for this Peruvian feature. El Dorado was a legendary city believed to be a myth. Yet, strange satellite imagery shows the existence of a massive civilization which goes against everything we thought we knew. Just like North America, the Amazon has its own Sasquatch-like creature which has been spotted many times but never explained in any way. At the mouth of the Amazon, researchers found a massive coral reef – a strange find in this area of the world. Searching through the forest, some explorers discovered tiny little structures on the trees and plants that looked like white picket fences. What are they and who built them? Naturally, we need to address the alien sightings, whether you believe they exist or not. Finally, we’ll end on a strange sight involving a relationship between a mysterious tree fungus, caterpillars and ants. It’s a bizarre love triangle – Amazon style.

Bizarre Discoveries In The AMAZON That Scientist Can't Explain 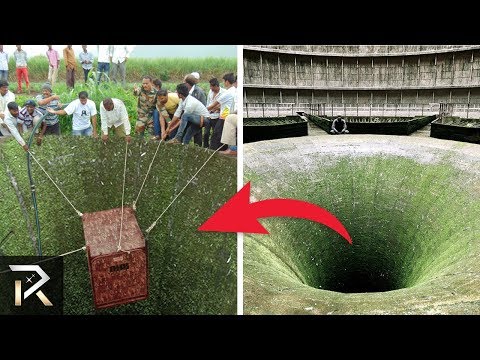 Try out ThePremium Network for free: http://goo.gl/6UA678 BIZARRE DISCOVERIES In The Jungle That Scientists Couldn't Explain Subscribe to our channel:...