(warning: distressing images) At least 150 Palestinians were injured after Israeli police moved in on worshippers at Jerusalem's Al-Aqsa mosque on Friday, according to the Palestine Red Crescent Society. The clashes come during a major holy week, with Ramadan, Passover, and Easter all coinciding.

Israeli police were seen assaulting worshippers with sound bombs and rubber bullets, as well as corralling and beating people.

Tensions grew after Palestinians reportedly started throwing rocks at nearby Israeli police, causing dozens of officers to enter the compound of the mosque. The situation escalated as Israeli police entered the mosque to arrest people inside, an action seen as a major provocation. The mosque's director confirmed that 'hundreds' of suspects were arrested as the violence came to an end.

Gatherings at the mosque continued after the arrests on Friday, welcoming in approx 60k people for midday prayers. Al-Aqsa mosque, the third holiest site in Islam, sits on a highly contested location within East Jerusalem, also one of the holiest sites for Jews.
» Sign up for our newsletter KnowThis to get the biggest stories of the day delivered straight to your inbox: https://go.nowth.is/knowthis_youtube
» Subscribe to NowThis: http://go.nowth.is/News_Subscribe 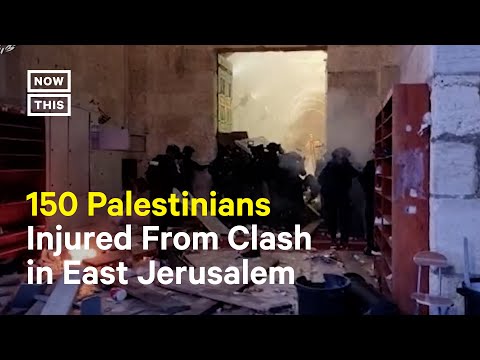 (warning: distressing images) At least 150 Palestinians were injured after Israeli police moved in on worshippers at Jerusalem's Al-Aqsa mosque on Fri...