We have all seen people on the streets asking for some spare change. Sometimes they hold up hand-written signs made of cardboard and magic marker. Some of these signs are simple pleas for money, but others are pretty clever and a few are downright hilarious. In this video, we will show you twenty of the funniest signs spotted on the street. We can never know what unfortunate circumstances lead to someone ending up homeless, but according to some signs, we have everything from ninjas to Sith lords to blame! You might worry that the person you’re giving money to is just going to spend it on alcohol, but some people will remove any trace of doubt in your mind by flat out telling you that they are just looking for beer money! We hope that food is one of the things bought with the money we hand over, but one guy on our list seems to have a bit of a problem over imbibing with Cheese Doodles. Now, we aren’t saying that is how he ended up on the street, but we can’t know for certain! Some people are raising money for some rather suspicious objects that we aren’t sure exist in the real world such as flux capacitors and lightsabers. Others, are offering services in exchange for money, such as $2 therapy, or just 25 cents to throw a quarter at someone! Although we sincerely hope that most people just hand him the quarters instead of pelting him with them. 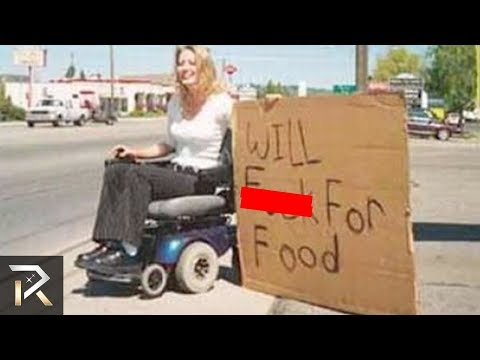 Try out ThePremium Network for free: http://goo.gl/xummqn HOMELESS SIGNS That Actually Worked! Subscribe to our channel: http://goo.gl/9CwQhg For copy...