Colombia’s Truth Commission has presented its final report on the country’s long-running civil conflict, announcing that at least 450,664 people were killed over nearly six decades of fighting.
The long-awaited report from the Truth Commission on Tuesday said the effect of the conflict between the Colombian military and rebel groups has been “massive and intolerable”. It also called for substantial reforms in Colombia’s approach to drug policy, which it said helped prolong the civil war, and urged redress for the victims of the conflict.
The commission was set up as part of a 2016 peace deal between the government and the Revolutionary Armed Forces of Colombia (FARC). It was tasked with documenting abuses and explaining what caused the conflict to persist for so long. 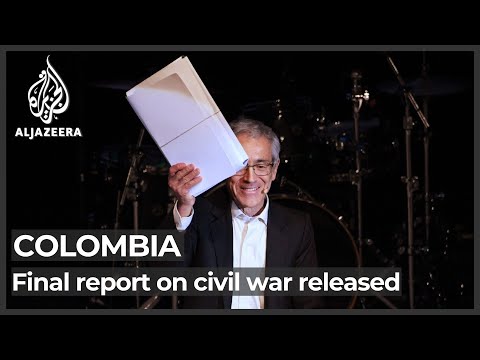 Colombia’s Truth Commission has presented its final report on the country’s long-running civil conflict, announcing that at least 450,664 people were ...