Gulf nations need to diversify their economies and move away from oil dependency, says the International Monetary Fund (IMF).

This warning comes as Saudi Arabia continues to work out how to sell around five percent of its state-run oil producer, Aramco - a deal that could raise more than $100bn.

The plan is at the heart of an ambitious economic reform programme, which includes a new $500bn megacity near the Red Sea. It's hoped the extra money from the sale will make Saudi Arabia less reliant on the black gold in the long term.

The kingdom is experiencing a recession after shrinking in two consecutive quarters for the first time since 2009. Growth this year is expected to be close to zero.

Saudi Arabia's budget deficit currently stands at 9.3 percent of its gross domestic product (GDP), it has suffered due to recent low oil prices. And unemployment edged up in the second quarter to nearly 13 percent - although that number is far higher for under 29-year-olds.

Examining Saudi's 2030 vision, Ayham Kamel, head of Middle East and North Africa research at the Eurasia Group, explains, "it's a vision, it's aspirational more than anything. They're trying to implement key parts of it. It's fundamentally changing the kingdom's political and social structure in a movement that's much more viable - fiscally and regionally."

Kamel says Saudi Arabia's "short-term challenges are very linked to oil prices." But in the long-term, the kingdom "needs to have an economy that is not oil or energy based" in order to curb unemployment and deal with other structural issues. This explains why they're trying to "get the private sector to play a bigger part in the economy. This is practically the end of the Saudi-state dictating all economic activity."

While the country is open to foreign investment, "it's domestic investment that's important for Saudi Arabia right now - finding ways to stimulate the economy... and shift it towards something less based on energy. That diversification drive is why the state needs to sell a piece of Aramco," says Kamel.

Britain's central bank raises interest rates: The Bank of England has raised its key interest rate for the first time in a decade. The 0.25 percent hike was widely expected. British policymakers are trying to dampen inflation which has been ticking steadily higher. But with concerns over the country's Brexit-dented economy, which dilemmas in the current landscape might now be worrying the bank's governor the most?

Jeremy Cook, chief economist and head of currency strategy of World First in the United Kingdom offers his take.

Turkey's economy: Turkey's economic growth is one of the fastest among the world's 20 largest economies. Its gross domestic product recently topped 5 percent, something only bettered by China and India. But it's also dealing with high inflation and a falling lira. Sinem Koseoglu reports from Istanbul.

Nigeria oil clean-up: The clean up of a contaminated fishing community in Nigeria has finally begun, almost 10 years after two oil spills. Shell pipelines had corroded and the result saw millions of litres of crude oil pour into creeks and swamps around the Niger Delta. Ahmed Idris reports from Bodo.

Qatar's water reservoirs: The construction of five water reservoirs in Qatar are almost complete. Once finished, they will be among the world’s largest reservoirs, with a capacity of some 100 million gallons of water each, as Laura Burdon-Manley reports from Doha. 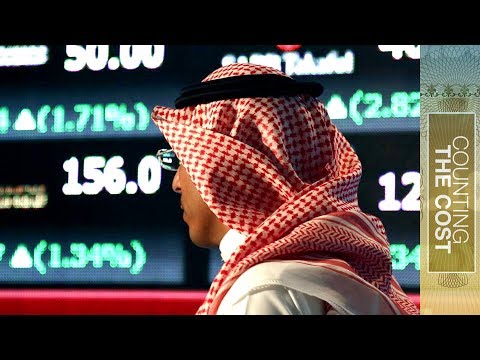 Gulf nations need to diversify their economies and move away from oil dependency, says the International Monetary Fund (IMF). This warning comes as Sa...