Billionaire US President Donald Trump wants to reform the US tax system, like others before him. But his plan looks more like tax cuts for America's wealthiest and some of the world's biggest corporations.

Although it's yet to be fleshed out, it's based on the idea that the cuts will pay for themselves, with the economic growth they generate in years to come. Yet, that's never happened in the history of US tax cuts.

In economics jargon: this is a classic supply-side response to a demand-side problem. But why help companies and investors if workers are the ones in trouble?

It's been done before and George HW Bush famously called it "voodoo economics" to discredit the notion that cutting tax rates will increase revenues.

It's likely to push up the deficit, and opponents say it'll deprive the government of money to spend on things like healthcare or social programmes.

"It's pretty clear this plan was set out by Goldman Sachs ... the plan calls for fairly radical change in the corporate income tax to what's called a 'territorial income tax'. Major companies like Apple and Google, which have parked a lot of money in tax havens offshore - about $2 trillion - would be able to bring that back at a very low tax rate."

Henry believes that this could "set off a real international tax war between countries".

"It's bad tax policy, and I think the EU would be upset because they would see the United States converting to a territorial tax - basically continuing this kind of global tax competition and the race to the bottom we've suffered from for a very long time. This is a complete reversal to all the progress we've made getting a handle on base erosion and corporate tax dodging."

"The United States does need a tax reform, a tax simplification, but this ... will basically transfer the burden of taxation to the middle class and the poor in the form of inflation," says Henry.

Meanwhile, tax disputes are brewing across the Atlantic over the way big US tech companies are taxed. The European Commission is trying to figure out how to claw back revenue from Apple. This week it said it will take Ireland to court to force it to recover $15bn from the iPhone maker.

Apple and Ireland dispute the 2016 ruling by the EU saying that the world's most valuable company received illegal state aid. Tech giant Amazon is also in the firing line and has been ordered to pay $294m to Luxembourg.

The European Commission says between 2006 and 2014, Amazon used the country as a haven to avoid European taxes. Meanwhile, Amazon says it did "not receive any special treatment from Luxembourg".

Catalonia economy: Spain has desperately tried to halt a drive for independence in Catalonia that threatens to derail its economy. Millions of Catalans voted last week in hopes of an independent country that would remain in the European Union, sitting between France and Spain. But would things really go as smoothly as they believe? Laurence Lee reports from Barcelona. And Claus Vistesen, a senior eurozone economist with Pantheon Macroeconomics, looks at the economics of Catalonia's independence.

'Carmageddon': This week Toyota ended 54 years of production in Australia. Later this month, another car maker will stop production, and with that, cars will no longer be made in Australia. As Andrew Thomas reports from Sydney, the changes also point to new economic drivers.

Monarch Airlines: British taxpayers could be hit with a nearly $80m bill after the collapse of Monarch Airlines, the country's fifth-biggest airline. It will have to pick up the tab for flying passengers home, as Neave Barker reports from Gatwick Airport in London.

Yahoo: This week Web services provider Yahoo admitted that every single Yahoo account in existence in 2013 was hacked. That's three billion accounts, three times the number it disclosed last year, when it reported the largest hack attack in internet history. Yahoo's internet assets have now been bought up by Verizon. And it's new owner may face legal action over delays in reporting the security breach.

Football on social media: Most sports fans of big football teams will also be following them and their star players on Twitter, Facebook and Instagram. Increasingly, big clubs are tuning into the power of social media to help build their brand. But what if you turn that on its head? Imagine a football team put together on social media, where the fans are the ones who influence who they play next. That is happening in the UK, as Sara Khairat reports from London. 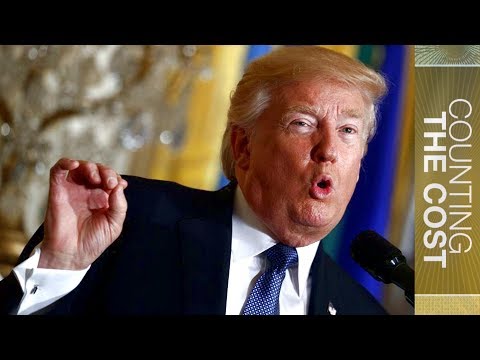 Billionaire US President Donald Trump wants to reform the US tax system, like others before him. But his plan looks more like tax cuts for America's w...