Ahead of the September 24 national elections, surveys show that Germans are satisfied with the state of their economy. However, analysts warn cracks are appearing and if Angela Merkel is elected to a fourth term as German chancellor she will have to deal with them.

There's no disputing Germany's economic success story: The country's central bank projects that this year's growth might be even stronger than the 1.9 percent posted last year. Unemployment is at a post-unification low of 5.7 percent and the government's budget is in surplus.

However, Germany has the world's second-oldest population after Japan and the income gap between the richest and poorest Germans is growing, spurring calls for greater investment in education and infrastructure.

"One of the things that Germany has done very well in the course of the last decade and slightly longer, actually, has been to engage in a process of domestic restructuring, but that has come at the cost of widening income imbalances. Those at the bottom end of the scale are struggling to make ends meet, but the average standard of living in Germany is significantly better than it is in a number of other European countries, so we shouldn't be too critical," explains Peter Dixon, chief economist at Commerzbank.

Then there's the issue of Germany's place in the digital economy. Critics say its lack of broadband infrastructure puts it in the slow lane.

Dixon thinks Germany will make progress over time in the digital arena. "The digital economy, automation, the substitution of labour for robots in some industries is certainly very high on the agenda. It's something which many German companies are at the forefront of, anyway. So, I think we will over time see Germany begin to make progress in this area."

The car manufacturing industry is still embroiled in the fallout from a massive international scandal, and the automotive industry itself is changing.

But Dixon explains that while the automotive industry has taken a hit from the Volkswagen scandal, "what German automakers have is scale, unlike Tesla. So Germany is lagging behind at the moment, but it's not always the first mover in this game which wins the race, so I wouldn't write them off just yet."

Climate change insurance: The global insurance industry is still trying to assess the likely costs of this year's extreme hurricane season in the Atlantic Ocean. The fear among some risk assessors is that climate change means some assets may become uninsurable in the future. The risk is that extreme weather means claims will rise faster than expected and that premiums will not be adequate to cover the shortfall.

Peter Zimmerli, head of atmospheric perils at Swiss Re, talks to Counting the Cost about the so-called "protection gap".

Internet privacy: The growth of the digital economy has exposed consumers to an unprecedented level of risk regarding personal privacy, an issue that's pitting the US against the European Union. Kristina Irion, a senior researcher at the Institute for Information law at the University of Amsterdam, discusses data protection.

Ryanair: Europe's biggest discount airline, Ryanair, flies into trouble with pilots and passengers as it cancels thousands of flights. The airline was forced to cancel 48 flights a day for the next six weeks after admitting it messed up the planning of pilots' annual leave. Ryanair also offered bonus payments to captains and first officers to forego leave. But now some pilots want to re-negotiate their contracts with the Irish airline and are discussing the possibility of "mass sick days."

The airline says more than half the passengers affected by the mass cancellations have been rebooked on alternative Ryanair flights. Others were issued refunds. The airline is likely to face a bill of at least $25m.

Aerotoxic syndrome: A new study published by the World Health Organization says people who fly regularly may be at risk from breathing contaminated air. UK-based airline EasyJet is trying out a new air filtering system, but denies that's because crew and passengers are at risk. Caroline Malone explains.

China bullet train: China has unveiled the world's fastest bullet train this week, the Fuxing. It will travel up to 350 kilometres an hour, and shave 30 minutes off the journey time from Beijing to Shanghai. But there are concerns about the cost of China's high-speed rail ambitions, as Adrian Brown reports. 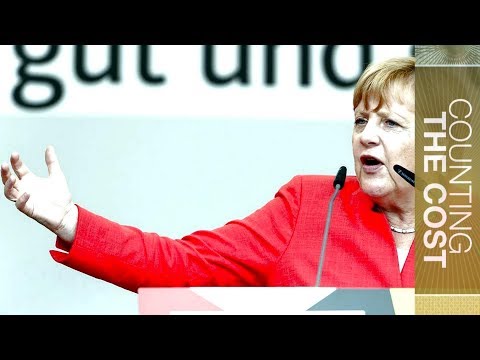 Ahead of the September 24 national elections, surveys show that Germans are satisfied with the state of their economy. However, analysts warn cracks a...