Counting the Cost - Online streaming wars: Behind the Disney-Fox deal

It's one of the biggest media shake-ups in recent history.

The Walt Disney Company is in the process of buying up the entertainment businesses of Rupert Murdoch's 21st Century Fox in a landmark $52.4bn deal. If it's approved, it'll be a union of Hollywood's heavyweights.

But the wider story is about how people consume entertainment content in the digital age and what this means for the corporate landscape.

"In the media world this is absolutely huge, but in the tech world, the combined entity is still far off the likes of Facebook, Google and Amazon, and I think that's actually the point. Disney and Fox are realising that with the growth that you're seeing within the tech versus media companies, the only chance they've got is by being a combined entity," says Mark Mulligan, managing director of Midia Research.

Mulligan thinks the change is necessary because "all of these companies [Google, Facebook, Amazon] are going to be going right at the home turf of Disney and Fox ... What we're in at the moment is a battle between distribution and content. The saying always used to be that 'content is king' but now we're seeing the distribution, the big technology companies - that's where the power resides. So I think we need to look at the Disney-Fox deal within that context."

With so many streaming services around the world, Mulligan says there's "a degree of maturity in online
streaming - so there's still vast amounts of growth in this market."

Interestingly, one of the things Netflix is great at is "migrating people away from mobile viewing to TV-
centric viewing. The majority of people who sign up for Netflix on mobile will after a number of months
mainly be watching through a TV set. So, there's a real recognition from the streaming companies of
the need to get people away from the less reliable mobile networks into a home-wifi."

"But there's going to be a much bigger challenge at the moment which is looking like we're going to have new regulations on net neutrality in the US", says Mulligan.

"What that essentially means is that telephone companies that provide the internet access are going to be able to decide which services they want to perform well and which not ... so it might be that a telephone company in the US has launched its own video service and it decides anybody who's watching Netflix is going to get a small amount of connection - so however good your broadband connection is Netflix is always going to under perform. And that's potentially one of the most worrying developments that's facing streaming services at the moment."

Gas Exporting Countries Forum: Gas-producing countries like Qatar, Russia and Iran have laid out what they think is the future of their industry for the next two decades and it's looking strong. Kamal Santamaria went to the headquarters of the organisation in Qatar to catch up with Dr Mohammad Hossein Adeli, the organisation's secretary-general.

Net neutrality: This week, rules protecting open internet access have been repealed by the US government. The changes could mean large corporations can pay internet service providers to prioritise their websites, and even block their competitors. Net neutrality advocates worry it could lead to censorship and increased internet access costs. Heidi Zhou Castro reports from Washington.

Retail armageddon: It seems one way to survive retail armageddon is to engage in some retail therapy. Christophe Cuvillier, the CEO of European mall owner Unibail-Rodamco, has said online shopping has its limits and physical stores will never go out of fashion. He has predicted online shopping will peak at 20 percent of global retail spending from 8 to 10 percent currently. Unibail-Rodamco, which has high end malls from Paris to Helsinki, is bidding $15.7bn to buy Australia's Westfield. The deal, if approved will create the world's biggest mall operator.

Greece solar: For so long Greece was about debt and economic hardship, but during that long recession, Greece underwent rapid growth in the use of solar energy. And it means the country will now meet its emissions targets under the Paris Climate Change Accord. John Psaropoulos reports from Lavrio.

Counting the Cost - Online streaming wars: Behind the Disney-Fox deal 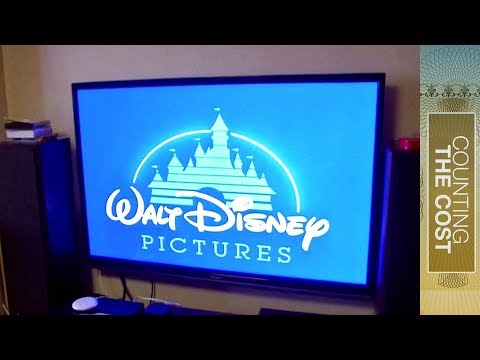 It's one of the biggest media shake-ups in recent history. The Walt Disney Company is in the process of buying up the entertainment businesses of Rupe...