Tune in to the Saudi Arabian version and Saleh's killing this past week by Houthi rebels is used as justification for continuing a war in Yemen that has already claimed as many as 10,000 lives and left millions suffering, in the world's worst current humanitarian disaster.

Pro-Houthi media saw Saleh's savage end as a blow to Saudi efforts to overthrow them.

Foreign audiences may be forgiven their confusion of the causes of this conflict, given that much of the coverage of the war's main architect, Crown Prince Mohammad bin Salman of Saudi Arabia, has been enthusiastic, even effusive.

There's little reporting of the behind-the-scenes roles Britain and the United States are playing in this conflict - underwriting the Saudis with arms, expertise and diplomatic cover.

There are a lot of angles to this story - including the alleged role Iran is playing in Yemen, an angle long on allegations and short on proof.

"The problem with the press, the Saudi-backed press or Saudi-funded press, like all Arab-funded press establishments, is that it is simply a propaganda tool and therefore we shouldn't take it as a reflection of any independent thinking, but as a reflection of the political views of the power elite at that moment, because that view can change the next day, just as Ali Abdullah's position changed overnight," says journalism professor Rami Khouri at the American University of Beirut.

If Yemenis are confused by how their story is being told, they can always watch state-owned Yemen TV. They just have to decide which one. There's the one based in Sanaa, on the air since 1975; and the one Saudi Arabia created last year, that is beamed into Yemen from Riyadh.

Saudi-funded news outlets spend a lot of airtime talking about Iran. The narrative: Shia Iran seeks influence through its Houthi proxies in pursuit of a larger, regional hegemony that represents a threat to any Arab country, particularly states with sizeable Sunni populations.

It was on that basis that Saudi Arabia entered the war in Yemen in 2015. That war has since turned into a stalemate, a humanitarian catastrophe, and like the military offensive it was supposed to bolster, the Saudi narrative on Iran has grown less popular and less credible with time.

"The claim that the Houthis are a proxy of Iran in Yemen is, is ludicrous, and most knowledgeable observers of the Middle East don't take it very seriously," explains Khouri. "And this is a real problem, because if suddenly the Saudis and the Iranians enter into negotiations, which will happen eventually, the Arab media that is close to Saudi Arabia or funded by it, is suddenly going to turn on a dime and they're going to suddenly talk about Iran as a strategic partner and a good neighbour and we live together in respect and peace. So the credibility of the media has been terribly damaged all across the Arab world when the Saudis and others use it to push a propagandist case."

The Saudis have also pushed their case in the international news media - through a public relations offensive aimed at diplomats and news organisations. That has borne fruit in the relatively positive reviews for the new crown prince who championed the same war in Yemen that has morphed into a quagmire. And the PR offensive may have led the international news media to divorce the humanitarian side of this story from the political - divorcing the effect from the cause.

"The Anglo-American media has been criminally complicit in not reporting accurately about what actually is going on in Yemen in terms of the deeper context of who is responsible or who is engaged in the war in Yemen. It's presented as a great tragedy," says Khouri.

While Houthi authorities can claim victim status in this Saudi-led media war, they are hardly an innocent party. Their version of state-owned Yemen TV is tightly controlled, and they have shown little tolerance for critical reporting by Yemeni journalists. 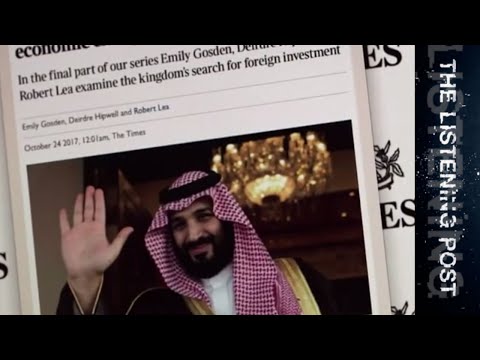 Last week, Yemen's former President Ali Abdullah Saleh was killed, but media coverage has not been straightforward. Tune in to the Saudi Arabian versi...