TRUMP'S ELECTION LIES DRAW PROTESTERS TO D.C.: Thousands of Pres. Trump's supporters have descended on Washington for a mostly maskless protest against President-elect Biden's victory. Trump continues to make false and imaginary claims of widespread voter fraud, even as election officials of both parties in all 50 states and his own Justice Dept confirm that no such fraud occurred. More than 90 federal and state judges have ruled against challenges to the election, many of them appointed by Trump himself. The only documented instance of an apparent effort to steal the election happened when Trump was caught on tape unsuccessfully pressuring Georgia's secretary of state to 'find' more votes for him. Trump himself is expected to address the crowds later this morning.

Dangerous unrest is feared, as Republican rhetoric has become more extreme. This weekend Rep. Louie Gohmert (R-TX) suggested 'violence in the street' would be necessary if the election results were not overturned. Last night Trump supporters clashed with D.C. police, and several were arrested. The presence of such a large, mostly maskless crowd also poses a threat to the community as COVID-19 infections are surging. A Stanford study found that 18 of Trump's pre-election rallies led to more than 30,000 confirmed infections and 700 deaths.
» Subscribe to NowThis: http://go.nowth.is/News_Subscribe
» Sign up for our newsletter KnowThis to get the biggest stories of the day delivered straight to your inbox: https://go.nowth.is/KnowThis 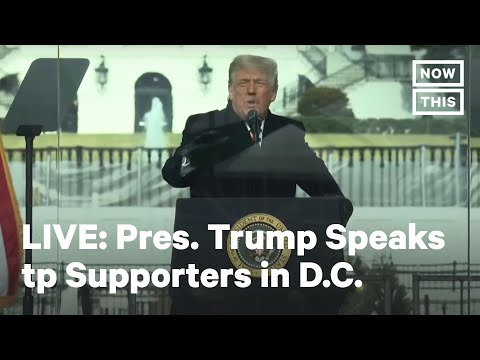