Cute Celeb Kids Who Grew Up Not So INNOCENT

It can be tough being a kid at times, but it’s exponentially more difficult being a kid and also navigating life in Hollywood. When it comes to child stars, it feels like we have watched them grow up before our eyes, while others disappeared from the public eye only to reemerge all grown up. In this video we will show you ten celebs you remember from your childhood, who have grown up to be incredibly attractive. Jonathan Lipnicki starred in the Stuart Little movies and was in Jerry Maguire before he took a sabbatical from being on screen. He used his off time to get buff and train in mixed martial arts, and we bet you would never recognize him today! Hailie Mathers, the daughter of Eminem grew up in the studio with her father. You have probably heard the songs about her, but now you can see that she is all grown up. Losing a parent is devastating, and doubly so when he is a popular but highly controversial figure like Michael Jackson. After years of being hidden from the world, Paris Jackson is stepping out into the spotlight, and dabbling in both modeling and acting. You probably remember Michelle Trachtenberg as Harriet the Spy, or her role on The Adventures of Pete & Pete, but somewhere along the way she grew up and began taking on much more villainous roles. For many seasons of Keeping up with the Kardashians it was easy to overlook younger siblings Kendall and Kylie Jenner. However, now the pair are all grown up and getting their names out there on their own merit.

Cute Celeb Kids Who Grew Up Not So INNOCENT 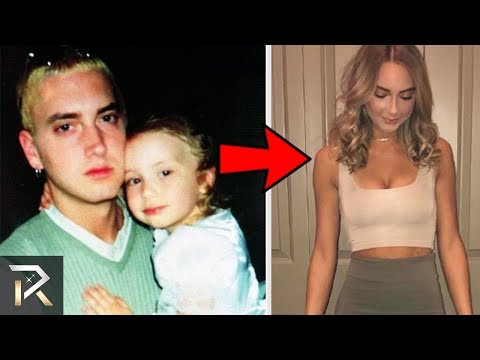