The former police officer who shot and killed Daunte Wright was arrested and charged with second-degree manslaughter. We’re covering this story and more on this week’s segment with Zinhle Essamuah.
» Subscribe to NowThis: http://go.nowth.is/News_Subscribe
» Sign up for our newsletter KnowThis to get the biggest stories of the day delivered straight to your inbox: https://go.nowth.is/KnowThis

Former Minnesota cop Kim Potter appeared in court via video conference for the first time since being arrested.

This week, former police officer Kim Potter was charged with second-degree manslaughter for the death of 20-year-old Daunte Wright during a traffic stop in Brooklyn Center, Minnesota. A defense witness in the Derek Chauvin trial testified that George Floyd died from heart disease, not by Chauvin’s knee on his neck. Health officials paused administering the Johnson & Johnson vaccine after at least 8 people developed rare blood clots. President Joe Biden announced that he would end the ‘forever war’ in Afghanistan by withdrawing troops by September 11, 2021 — the 20th anniversary of the 9/11 attacks. And, countries are unveiling their Olympic teams’ closing ceremony outfits. 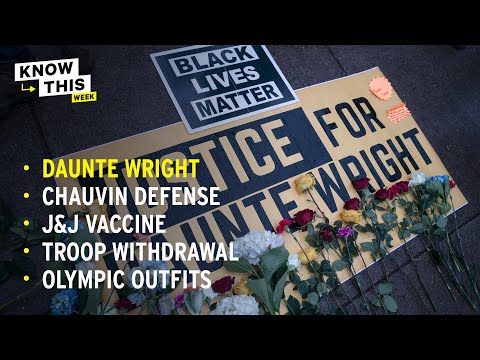 The former police officer who shot and killed Daunte Wright was arrested and charged with second-degree manslaughter. We’re covering this story and mo...