Fewer than one in four people in India have a smartphone, but in a country of more than 1.3 billion, that's about 300 million. And as of February 2017, 200 million of them are on WhatsApp - texting, voice messaging and video-calling each other - making India the messaging service's biggest market.

The growth of WhatsApp has coincided with a wave of political and socio-religious activism in India. Political parties, and the ruling party BJP in particular, have been adept at using the messenger as a powerful campaigning tool. Many religious and civic groups that share the BJP's Hindu nationalist agenda are also very active Whatsappers.

As the party has focused its efforts on regulating cow slaughter and beef eating across the country, dedicated groups have sprung up on WhatsApp, tracking and targeting those they suspect of harming animals considered sacred by Hindus.

In September 2015, in a village just outside of New Delhi, the local cow protection group got an alert of a man, Mohammed Akhlaq, who had supposedly killed a cow and stored its meat in his house. That information has yet to be verified, but it triggered a deadly domino effect.

"People see this, they don't go to law enforcement agencies, they don't call the police saying there's a possibility that Akhlaq had killed a cow. They go to his village, drag him out and beat him to death. And brutally assault his son," recalls journalist Mohammad Ali at The Hindu.

While tensions between different groups have always existed in India, "WhatsApp amplifies it on a scale that didn't really exist before," explains media professor Kalyani Chadha of the University of Maryland. "So WhatsApp is really in fact not just fake news, it's actually fake news with consequences."

Indian authorities are on the backfoot when it comes to even beginning to deal with the challenges posed by the misuse of WhatsApp. Technologically, and even in terms of regulation, law enforcement officials are struggling to catch up.

WhatsApp itself says keeping a check on the spread of misinformation is "complex". Earlier this year, one of the company's engineers, Alan Kao, said the key challenge to monitoring WhatsApp was encryption. It's one of the most valuable features of the messaging service, helping ensure privacy and security, but it makes it impossible to get to the root, the source, of some of the most dangerous messages being shared on the app.

"Whatsapp has end-to-end encryption...Whatsapp has become the primary medium to spread rumours, because people know that they will have a large amount of legal immunity, even if they are pushing out news which might lead to disastrous consequences like people being killed," says Sinha.

Speaking on the political polarisaion of Indians, Ali says, "the digital ghettoisation has increased much more now. We are looking at millions of people in a rural India being constantly radicalised through WhatsApp. They may not be ideologically-driven, but they have been ideologically appropriated." 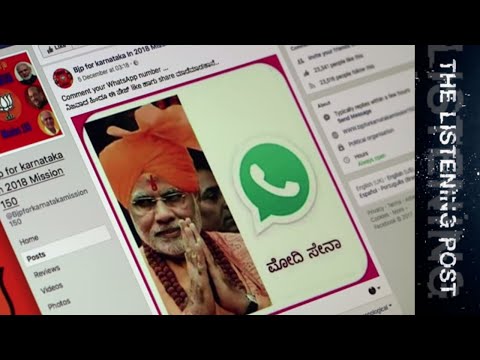 Fewer than one in four people in India have a smartphone, but in a country of more than 1.3 billion, that's about 300 million. And as of February 2017...