Differences Between Types of Laughter

Professor Sophie Scott of University College London studies cognitive neuroscience of human communication. She is well-known for her TED Talk called, "Why We Laugh." We asked her to explain the difference between the types of laughter we use in social situations. Following is a transcript of the video.

Sophie Scott: Human beings tend to think that we laugh at jokes and comedy, but actually, a psychologist called Robert Provines found that human beings mostly laugh when they’re with other humans — it's a social behavior.

Hi, my name's Professor Sophie Scott and I'm based at University College London where I study the cognitive neuroscience of human communication.

And what this actually means is that a lot of our laughter is doing kind of social affiliative work. So, we’re laughing as much to show that we like someone, we know someone, we’re part of the same group as someone. We understand them.

In fact, this quite striking number — you’re 30 times more likely to laugh if there’s somebody else with you than if you're on your own. It’s primed by other people being there and then it will be shaped by how you feel about those other people.

I think that the two most important kinds of laughs or distinctions between laughs are whether or not they are completely involuntary or if they're a bit more communicative. So, if you think back to the last time you laughed and you could not stop laughing, you absolutely lost it, that feels quite different. And it can be really hard to break out of as compared to a lot of the laughs that happens in conversations which you drop into and out of really quickly and you time really precisely with the other people that you’re talking to.

So I think those would point to different kinds of brain systems that are involved and it suggests there may be a fundamental difference between sort of helpless laughter and more social laughter.

We know that chimpanzees have two different sorts of laugh. They laugh differently if they’re being tickled than if they’re trying to make play last longer. And that does sound a bit like our helpless laughter and our social laughter.

Genuine, spontaneous, helpless laughter is often indicated by, first of all, you can’t stop doing it. It just keeps coming through. If you try and stop yourself laughing, you'll find you start making funny noises and you try and talk and your voice will sound strange.

So, it's something that we are happy to share whether or not it’s voluntary or involuntary. I think the proviso is if you feel like you don't like somebody or you don't trust why they’re laughing, then you can be a bit more dismissive of their apparently social laughter — like, “Oh, what're they doing with that?” It’s almost like you hear the falseness when you don't have that friendliness and that affiliation for the laughter to fit in with.

Differences Between Types of Laughter 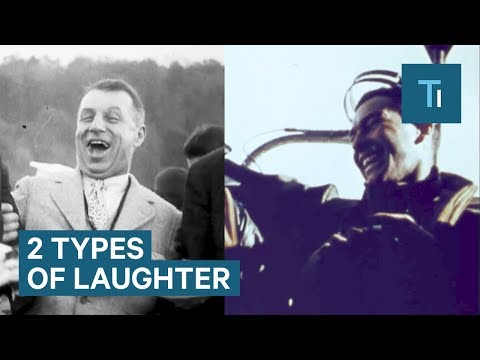