More than 150 years ago, a musician started a band in Cairo's Mohammed Ali Street, a hub for Arab musicians, belly dancers and instrument makers, near the opera house, cinemas and theatres.

Mohammad Hasaballah's brass band became so popular that it gave birth to an entire musical genre, which still resonates with Egyptians today.

Hasaballah was a clarinet player in a military band at the time of Abbas Helmi, a Khedive of Egypt under the Ottoman Empire. He was taught by Italians and when he retired from the army, he set up his own band.

Classically trained, his players were skilled at picking up tunes, and Hasaballah (the band) turned popular Egyptian love songs into a style that became hugely popular at weddings, parties and national festivities, even spreading to other parts of the Arab world.

Celebrated as "the people's music", "Hasaballah was an important development," says Mohammed Shabana of the Popular Performance Department at the Academy of Arts. "They transformed music from its formal, western-style into popular music."

"We didn't study music or notation," says 69-year-old Izzat Fayoumi who started his own Hasaballah-style band in 1970. "We learn by listening. We hear the music once or twice and then we play it."

While musical styles and preferences have evolved over the past 100 years, Shabana believes "Hasaballah will always satisfy certain needs. It interacts with and presents what appeals to Egyptians' musical taste. It spreads joy among those who invite them and make them part of their celebrations and happy times. It's an open space, enabling interaction between the performer and listener and among neighbours and friends who take part in the celebrations together."

Hasaballah's halcyon days are over and it's no longer performed in palaces for the upper echelons of Egyptian society or in movies - but many Egyptians still have a soft spot for it today.

A new generation of musicians has picked it up and found new ways to keep Hasaballah alive by adapting it with new instruments and rhythms. It keeps the street style but gives it a modern twist.

"We adopted the [Hasaballah] line-up of trumpet, trombone, bass and snare drums … but have just added the jumble", says Abdel Azim Mohammed, a member of the Hasaballa Marching Band. "Everything we play is jazz. Different rhythms create different styles of music, like funk and salsa. We play funk and salsa."

Shabana says that the legendary Hasaballah "managed to carve his name and his band into the collective Egyptian, artistic memory".

More from Al Jazeera World on: 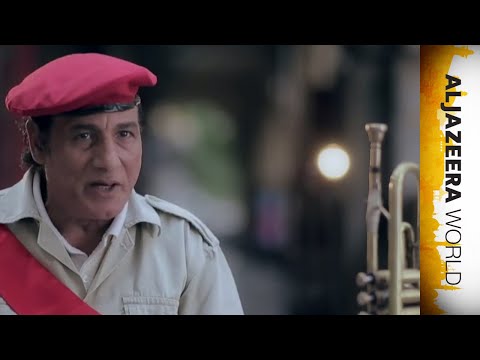 Filmmaker: Karim Midhat More than 150 years ago, a musician started a band in Cairo's Mohammed Ali Street, a hub for Arab musicians, belly dancers and...