Flying taxis, mega deals and aviation in 2018 - Counting the Cost

As 2018 gets underway, a couple of big multi-billion dollar deals are in play that could change the face of entire industries.

One blockbuster deal could reshape the global aerospace industry: Aircraft maker Boeing has held talks about a multi-billion dollar takeover of Brazil's Embraer.

The deal, should it go ahead, would combine the world's largest aerospace company with the third largest passenger jet maker.

The Brazilian government would have to sign off on it, and the two players have only confirmed they've had private talks. But the move is being viewed as significant within the industry.

In October, European rival Airbus secured a controlling stake in the C-series jet from Canada's Bombardier.

Is there more consolidation ahead for the aerospace industry?

Aviation in the Middle East

Tunisia is demanding an apology from the United Arab Emirates after the UAE banned Tunisian women from flying to the Gulf state or transiting its airports. In retaliation, Dubai-based Emirates Airlines is banned from operating flights from and to Tunisia. Charlotte Bellis reports.

How have the Tunisia travel ban, Trump's travel ban, the US laptop ban, and the Qatar-Gulf diplomatic crisis impacted the Gulf region as a travel hub?

"The global industry has done really well overall.... In the Middle East... there's pretty much been a handbrake stop on the kind of levels of growths that you have from 2012 to 2016 which were around 10 to 15 percent or so for Etihad, for Qatar and for Emirates. Those have dropped to pretty much one to two percent or so year on year. And it's even going to be less in 2018," says Peter Morris, chief economist at Global Flight.

Decades ago perhaps the general public thought we might all be travelling in flying cars by 2018.

But flying taxis are no futuristic fantasy today.

Airbus is looking to put its flying taxi in the air next year. It's a vertical take-off and landing electric-powered aircraft that will carry four passengers through urban areas.

Meanwhile, Embraer and NASA are teaming up with Uber on its flying taxi project. Uber's deadline for testing flying taxis is the 2020s.

"There's a lot of psychological barriers.... Aviation is the safest form of public transport, but nonetheless you will see an intense focus before those pilotless aircrafts are going to be permitted..., it's not that the problems are really technical, the problems are almost certainly psychological and regulatory," says Peter Morris, chief economist at Global Flight.

Arms sales on the rise

Global arms sales are up according to the latest report form the Stockholm International Peace Research Institute.

The report shows that US group Lockheed Martin is now the world's top arms producer.

And Brexit did not seem to have an impact on the arms sales of British companies. BAE ranks fourth on the top-100 list of global arms producers.

Russia has been getting more aggressive in the past few years and Chinese companies too are engaging in more defence sales abroad.

Driverless cars: 2017 was the year the driverless car and trucks became a reality. Laurence Lee reports

River Nile and water rights: We look at the ongoing struggle over the Nile and ask why Egypt is calling for the World Bank to help settle a dispute on the longest river in Africa.

Made in Greece: The plight of refugees is something that's likely to remain a focus in the year ahead, and one country on the frontline of the refugee crisis is Greece. Jonah Hull reports from Athens on how entrepreneurship is an important key to integration.

Flying taxis, mega deals and aviation in 2018 - Counting the Cost 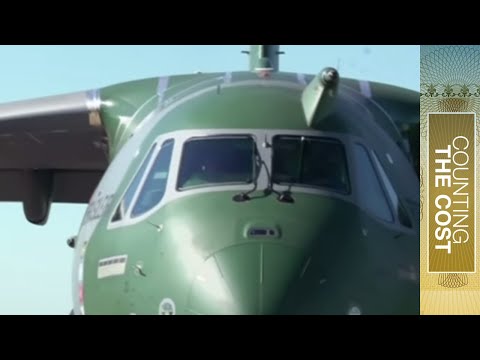 Blockbuster aviation deal ahead? As 2018 gets underway, a couple of big multi-billion dollar deals are in play that could change the face of entire in...