While the US media scrambles to find out any minor details about future iPhone models, workers in China already know a lot about the device. Dejian Zeng, an NYU grad student who spent 6 weeks working undercover in a Pegatron iPhone factory in Shanghai, explains what the factory would do to prevent leaks as they transitioned into working on the iPhone 7.

"It’s impossible for workers to take photos or even carry some components out."

Here’s how they kept the iPhone 7 a secret.

"Workers know how popular the iPhone is in China.

And typically when we started producing the iPhone 7, a lot of workers think it’s very cool that they see the products that have not yet been published.

In the workshop, we were originally producing the iPhone 6s, and during that time that we were in the workshop, they were already building up some facilities or infrastructure to build the assembly line for iPhone 7.

And they had this big curtain that blocked everything.

So even though we were in the same workshop, we saw nothing.

And later on, we were moved to another sub-factory building to do work there for a while, because they need to rebuild the assembly line that we are working on also.

After a while, we were moved back to the factory, and we had the new assembly line producing iPhone 7.

We have a locker room. That’s where workers changed their clothes, put their phones, their keys, all their metals.

We need to swipe our card, and they have facial recognition.

After you get in, you wait in line to go through a metal detector.

But that was during the time that I was producing iPhone 6s.

When I was producing iPhone 7, they increased their security level.

There were two metal detectors in the factories, and they also increased the sensitivity of it.

Like, for example, some girls have some bras that have metals in it.

All of a sudden, on that specific day, they couldn’t pass the security door, and they needed to go back and change everything.

Inside the factories, any kind of metal is not allowed.

So I don’t think anybody can bring a camera or something like that inside of the factories.

But high-level managers — they’re able to bring their phone.

So I’m not sure whether photos can get leaked by that.

But every time when they need to go through the metal detectors, the security will ask those managers to press the button on their phone, so that they can see the screen.

Because I think there are some cases where they bring an iPhone and put it in a case of a fake phone and just carried it out.

A lot of the workers, on the first day they start producing it, we can tell that there’s no headphone jack there.

And then we can see that they have two cameras.

So those are some things that we can see and we can remember and we can tell the media later on.

There are cameras in the workshop, in every assembly line.

During the training, they told us that there are some cases where workers were trying to carry iPhones out of the factories and got caught, and they were being sent to the police.

So when I was producing iPhone 6, I did see Apple come for audits.

And every time when they come, the manger in the factories got very nervous.

They would tell us you need to follow the procedure and sit straight, and don’t talk.

Later on, when we started producing iPhone 7, you could see Apple staff there every single day." 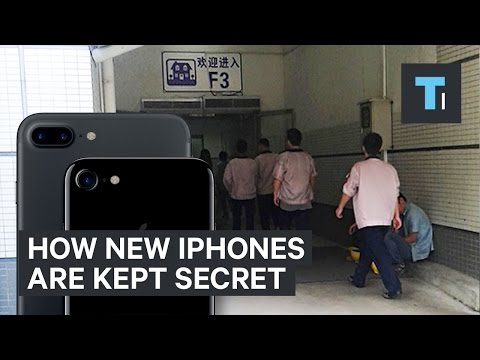 While the US media scrambles to find out any minor details about future iPhone models, workers in China already know a lot about the device. Dejian Ze...