One year since US President Donald Trump's election victory, the controversies surrounding his administration are growing. His former campaign chairman, Paul Manafort, was charged with conspiring against the US while another former campaign aide pleaded guilty to lying to the Federal Bureau of Investigation (FBI) about the timing of his contacts with Russia.

Despite Trump’s tumultuous year and Special Counsel Robert Mueller's investigation into alleged Russian meddling in the 2016 presidential elections, many continue to support him.

“There is no evidence that the president has ever worked with the nation's enemies,” says David Keene, former president of the National Rifle Association, the most powerful gun lobby in the US. “I'll tell you this, the Russians, the Americans, we've all ‘interfered’ in elections all the time, doesn't usually work.”

When asked about the lack of gun control and the fact the US has nearly six times the gun homicide rate as Canada, more than seven times as Sweden, and nearly sixteen times as Germany, Keene believes there is no connection between gun ownership and homicide rates.

The “argument that homicides are the result of the existence of guns is clearly not true,” says Keene, who is also the co-author of the recent book Shall Not Be Infringed: The New Assaults on Your Second Amendment. “There's not a direct relationship.”

In this UpFront special, we challenge Trump supporter and former President of the US National Rifle Association David Keene about whether the NRA is helping or hurting the United States. 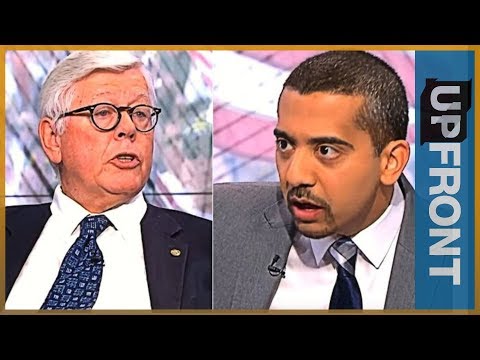 One year since US President Donald Trump's election victory, the controversies surrounding his administration are growing. His former campaign chairma...