Here’s Why Millions Are Still Protesting in India | NowThis

These farmers may be behind the largest strikes in human history, and it’s still going — so why are so many risking their lives in the middle of a pandemic?
» Subscribe to NowThis: http://go.nowth.is/News_Subscribe
» Sign up for our newsletter KnowThis to get the biggest stories of the day delivered straight to your inbox: https://go.nowth.is/KnowThis

In world news and current events today, farm workers in India are behind possibly the largest strikes in human history, and it's still going. Millions of people have taken to the streets in India since September, after the Indian government passed 3 new laws that they say are meant to modernize the agriculture industry. Farm workers are saying it puts the power in the hands of large corporations. The most controversial of the three acts allows farmers to sell directly to buyers for the first time since the 1950s. Currently, farmers sell through what is called a ‘minimum support price’ system, which guarantees that farmers who cannot sell their crops for a higher price than the state standard can sell their product to the government for a minimum set price. Those who oppose the new laws say the changes are intended to help large corporations, not farmers. An estimated 250 million workers, from a range of industries, took to the streets on November 26, in what’s been called the largest strike in human history. More than 50% of Indians work in the agriculture industry. Despite farming being a major part of the country’s economy, individual farmers have consistently struggled to make ends meet, leading to some of the highest rates of farmer suicide in the world and on and off protests since at least the 1940s.

Here’s Why Millions Are Still Protesting in India | NowThis 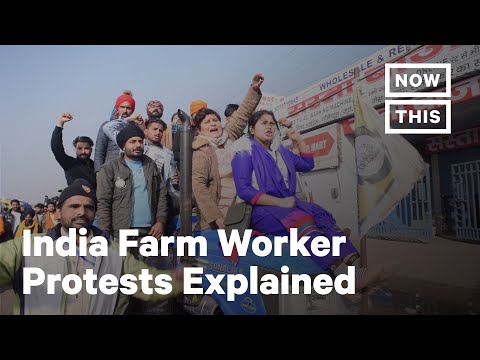 These farmers may be behind the largest strikes in human history, and it’s still going — so why are so many risking their lives in the middle of a pan...