The letter now signifies loyalty to the Russian president.

Russian gymnast Ivan Kuliak caused controversy in March 2022 when he accepted a bronze medal at a World Cup event, all while sporting a taped-on letter “Z” on his uniform. The Z symbol had already been appearing all over Russia, as a sign of support for the Russian invasion of Ukraine and loyalty to Russian President Vladimir Putin. The letter popped up on merchandise, in highly organized flash mobs that often involved children, at pro-war rallies, and in internet memes.

The symbol was originally spotted on Russian tanks and trucks building up at Ukraine’s border in late February, along with other letters like V and O. Questions about what the symbols meant began circulating online, and once the invasion began on February 24, most analysts agreed the markings were likely for tactical purposes.

But as intrigue around them grew, the Russian Defense Ministry seized on the opportunity to claim that the letters carry extra meaning. They began generating memes that incorporated the Z and V into propaganda slogans. Those letters don’t appear in Russia’s Cyrillic alphabet, so some of the memes Latinize them: most common are ones that begin with the word “for” — spelled “Зa” in Russian, but Latinized to “Za” for the memes.

Another way Putin’s regime has turned Z into a propaganda meme has been by connecting it with the Soviet victory over Nazi Germany in World War II. The “Great Patriotic War” maintains a significant presence in Russian culture — the anniversary of Germany’s defeat is celebrated each year on May 9, and World War II imagery is heavily associated with Russian patriotism and national pride. Z memes that incorporate old photos of Soviet soldiers — and the recognizable orange and black stripes of the Ribbon of St. George — are an attempt to equate the current war in Ukraine with World War II.

The Z has spread beyond Russia, too. It’s now seen in pro-Russian demonstrations worldwide and is banned in a growing list of countries. The Z’s evolution from tactical markings on invasion vehicles to a global pro-war symbol demonstrates the effectiveness of the Putin regime’s propaganda strategies.

Correction: A previous version of this video showed a photo at 4:06 of graffiti in Vologograd which depicted a satirical use of "Z" slogans. We have changed the image to a graffitied "Z" in St. Petersburg instead.

“Z” Is the Symbol of the New Russian Politics of Aggression, by Masha Gessen:
https://www.newyorker.com/news/our-columnists/z-is-the-symbol-of-the-new-russian-politics-of-aggression

‘Z’ How Russia transformed a letter of the Latin alphabet into the official (and ominous) symbol of its invasion of Ukraine, by Alexey Kovalev and Meduza:
https://meduza.io/en/feature/2022/03/16/z 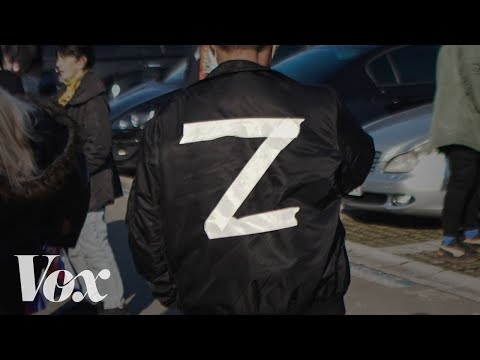 The letter now signifies loyalty to the Russian president. Subscribe and turn on notifications ???? so you don't miss any videos: http://goo.gl/0bsAjO...