How a Teen Climate Activist Struck Fear Into Our Leaders | NowThis

'I don't want your hope. I don't want you to be hopeful. I want you to panic.' — Teen climate activist Greta Thunberg is telling world leaders exactly what's at stake if they don't act.
» Subscribe to NowThis: http://go.nowth.is/News_Subscribe

This teen told the leaders of the world they need to ‘panic’
about climate change.

Greta Thunberg is a 16-year-old Swedish climate activist who has become known for delivering scathing speeches to world leaders. This time her speech criticized leaders for their lack of effective change at the World Economic Forum in Davos, Switzerland.

Thunberg: '‘At places like Davos. People like to sell success stories. But their financial success has come with an unthinkable price tag. And on climate change. We have to acknowledge that we have failed. All political movements in their present form have done so. And the media has failed to create broad public awareness. But homosapiens have not yet failed. Yes we are failing but there is still time to turn everything around. We can still fix this. We still have everything in our own hands. But unless we recognize the overall failures of our current system we most probably don't stand a chance. '

She first gained notoriety for skipping school to protest outside Swedish parliament or three weeks holding a sign that read: ‘school strike for climate.’ In Dec 2018, she spoke at a global conference in Poland and told politicians they weren’t ‘mature enough’ to take on climate change

Thunberg: 'We are facing a disaster of all unspoken sufferings for enormous amounts of people. And now is not the time for speaking politely. Or focusing on what we can or cannot say. Now is the time to speak clearly. Solving the climate crisis is the greatest and most complex challenge that homosapiens has ever have ever faced. ‘

How a Teen Climate Activist Struck Fear Into Our Leaders | NowThis 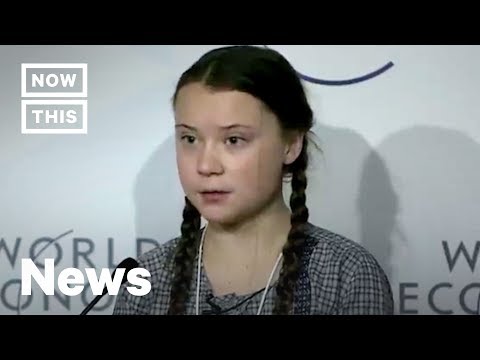