And the study that offers a glimpse into a post-Roe v. Wade future.

In 2008, researchers with the University of California San Francisco embarked on a study that compared the outcomes of two similar groups of women, each at a crucial juncture in their lives: a visit to an abortion clinic. The groups differed, though, in whether or not they were able to terminate an unwanted pregnancy. It was called the Turnaway Study, named for those who were turned away by the clinic because their pregnancies were past legal gestational limits, and it provides some of the best data we have on the impacts of abortion bans.

Among the study’s findings is the severe financial impact of being forced to parent a new child when someone is already living in difficult financial circumstances. People who seek abortions, especially later-term abortions, are far more likely than the general population to be living in poverty, or otherwise financially unstable. That fact makes it unsurprising that, when researchers asked women about their reasons for seeking an abortion, not being financially prepared was the most common reason. This video offers a glimpse into the financial penalty of parenting under difficult circumstances.

We interviewed several women who had similar experiences to the women in the study. We didn’t seek out interviewees who exactly reflected the circumstances of the study participants (i.e., the length of gestation when they sought an abortion, or their socioeconomic background) but their stories reveal some parallels: most people want an abortion because they don’t feel financially stable or don’t have a partner they want to co-parent with.

The Turnaway Study also looked at mental health outcomes, relationship outcomes, and whether or not study participants chose adoption instead of parenting. Whether or not they chose adoption is relevant to common pro-life rhetoric, which encourages people to give unwanted children up for adoption rather than choose abortion. But the Turnaway Study found that 91% of women who were denied an abortion chose to parent, which indicates that adoption is not a feasible alternative for most people. We interviewed Gretchen Sisson, a researcher who looked at adoption rates and motivations among the Turnaway Study participants.

For more coverage of the Turnaway Study:
https://www.nytimes.com/2013/06/16/magazine/study-women-denied-abortions.html?_r=0 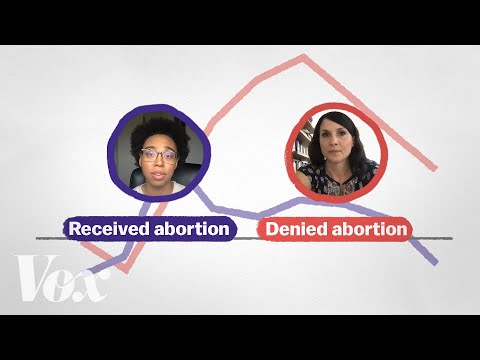 And the study that offers a glimpse into a post-Roe v. Wade future. Subscribe and turn on notifications ???? so you don't miss any videos: http://goo....