How are US special interests undermining climate action? | The Stream

The United States is one of the world’s most populous democracies, but it is also its second-biggest carbon polluter – and climate action advocates are alarmed at the unchecked influence of well-funded US lobbyists who are hampering urgent steps to curb global heating that the majority of the public demands.

Research published in Climatic Change in 2021 found that anonymous donors provided 74% of contributions to US conservative organisations obstructing climate change action between 2003 and 2018. The research, led by Professor Robert Brulle, highlights a swath of special interest organisations loyal to the fossil fuels industry that are funded by an estimated $8.2 billion in unidentified money.

Those same lobbyists are spending big on efforts to stop US legislative action to cut carbon emissions. A clean energy plan spearheaded last year by US President Joe Biden eventually foundered when Democratic Senator Joe Manchin – the biggest recipient in Congress of donations from the oil and gas industry – refused to give it the support it needed to pass the Senate. This was despite clear public support for the plan, which aimed to halve US greenhouse gas emissions by 2030 from 2005 levels.

The fossil fuel industry, along with the governments of oil-rich nations, also have major influence over international policy. When the Intergovernmental Panel on Climate Change recently published a 3,000-page mitigation report that said politics and corporate power are the main obstacles to urgent climate action, such conclusions were kept out of the summary for policymakers that was covered by media outlets. A new report by Robert Brulle says that US special interests have sought to control the IPCC since it was formed in 1988.

The influence of lobbyists over attempts to tackle climate change is such that Michael Mann, a professor of atmospheric science at Penn State University, says “we have lost decades of opportunity… we could have prevented much of the damage we are now seeing playing out”.

In this episode of The Stream, part of global journalism collaboration Covering Climate Now’s ‘Climate & Democracy Now’ series, we’ll look at how dark money is hampering climate action – and ask what’s needed to fight back.

How are US special interests undermining climate action? | The Stream 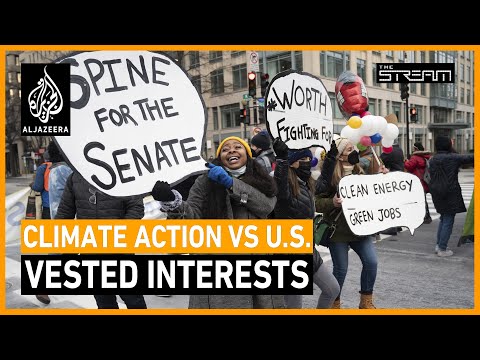 The United States is one of the world’s most populous democracies, but it is also its second-biggest carbon polluter – and climate action advocates ar...