How did anti-racists infiltrate the alt-right? - The Stream

Last year, Swedish graduate student Patrik Hermansson was invited to a summer barbecue in a US suburb. But instead of talking about baseball or the sweltering weather, he found himself having conversations about Hitler, how Jews should be "dealt with" and preparations for race war.

"I was scared for my life," he later wrote.

Despite his fear, Hermansson had such conversations for more than a year as he infiltrated the white supremacist 'alt right' movement for anti-racism group Hope Not Hate. The information he gathered about the racists’ plans to go mainstream are to be featured in an upcoming documentary.

Hope Not Hate and Hermansson are not the only people to use such tactics.

Theo Wilson, a black actor from the US, went undercover online as a white supremacist in an attempt to better understand racist trolls who organise and recruit on the internet.

"It was painful at first. I’m still me," Wilson told the Denver Post. "To get beneath the pain, I had to begin to dissociate from myself as a black person. The pin pricks didn’t go away, but it began to feel like a character study. I’ve acted before, and the muscle I developed learning theater allowed me to do this. Acting teaches you that you can’t just act, you have to be."

The tactic is not without controversy. Critics say a new wave of activists infiltrating white supremacist groups as they appear to be growing in number may simply drive them further underground and make them more difficult to track, to understand and to investigate and arrest.

"They were much smarter, much more professional and much more organised than I had given them credit for," he said in a Southern Pooverty Law Centre interview. "I was expecting it would be kind of like hanging out with a street gang and that the violence would be very unpredictable and that there was not really much substance behind their philosophical and religious arguments -- that it was all just motivated by ignorance and hate as opposed to ideology. It surprised me how complex the ideologies were."

So how effective is this tactic? What are the difficulties in going undercover? And is white supremacism a growing global threat? Hermansson, Wilson and German join The Stream to discuss.

How did anti-racists infiltrate the alt-right? - The Stream 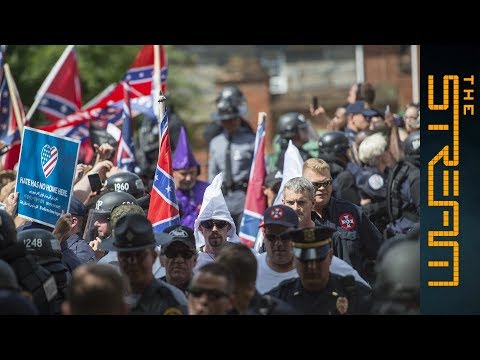 Last year, Swedish graduate student Patrik Hermansson was invited to a summer barbecue in a US suburb. But instead of talking about baseball or the sw...