Jackie Chan is a world famous celebrity, known for his Kung Fu, martial arts and Hollywood blockbuster films. His net worth is also over $400 Million US Dollars! Here's how he spends it!


Jackie Chan is an international superstar. He rose to prominence in the 1970s, and since then, he has done everything from not only acting, but producing, directing, singing, collecting, and of course… spending. And how could he not? His estimated net worth is $400 million dollars. And with how successful his movies continue to be, it looks like that bankroll isn’t capping out any time soon. Which is why we here at The Richest are taking a look at just what made Jackie a multi millionaire, and also one of the top paid stars in Hollywood, and of course, what in the world is he spending it on. From private jets, to a slew of expensive cars, to mansions located all over the world, to…. Signed pictures of celebrities? Oh you heard that right, and Mr. Chan collects them all. He’s even admitted to spending two million dollars on gifts for his friends. In a single year. I guess that makes sense when those gifts are cars, leather jackets, really expensive watches, and also some of the finest meals that money can buy. Yeah, we’d say if you bought all your buddies gifts like that, it’d be pretty easy to fly through 2 million dollars. But before you think that this man is some sort of spend-a-holic, and doesn’t think about anyone but himself, we should mention that this man is also one of the most generous celebrities in the world. We’ll be talking about just how much he has given to charity, oh, and not to mention the fact that he has promised his entire fortune will go to charity after he passes away. He truly is a one in a million guy, and an international treasure. And on top of all that, he’s also one of The Richest.


For copyright matters please contact us at: [email protected] 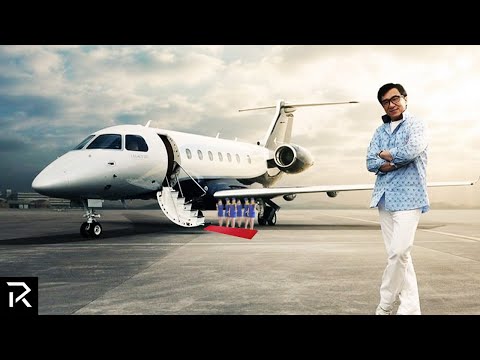 Jackie Chan is a world famous celebrity, known for his Kung Fu, martial arts and Hollywood blockbuster films. His net worth is also over $400 Million ...