In Ukraine, it’s become known as “the Holodomor,” meaning “death by starvation.” It was a genocide carried out by a dictator who wanted to keep Ukraine under his control and who would do anything to keep it covered up for decades.

In the 1930s, Soviet leaders under Joseph Stalin engineered a famine that killed millions as they sought to consolidate agricultural power. In Ukraine, they used additional force as they sought to clamp down on a burgeoning Ukrainian national identity. There, at least 4 million died. As hunger spread among residents, Stalin spearheaded a disinformation campaign to hide the truth from other Soviet citizens and the world. So many Ukrainians died that officials had to send people to resettle the area, setting off demographic shifts that last to this day.

Have an idea for a story we should investigate for Missing Chapter? Tell us! http://bit.ly/2RhjxMy

Sign up for the Missing Chapter newsletter to stay up to date with the series: https://vox.com/missing-chapter

Check out the Holodomor Research and Education Consortium for more information and resources: https://holodomor.ca/

We used the Harvard Great Famine Project’s maps and data for our video: https://gis.huri.harvard.edu/great-famine-project

The English translation of Ukrainian historian Stanislav Kulchytsky’s “The Famine of 1932-1933 in Ukraine: An Anatomy of the Holodomor” was crucial for context for this piece. https://holodomor.ca/the-famine-of-1932-1933-in-ukraine-an-anatomy-of-the-holodomor-by-stanislav-kulchytsky/

We used photos from Alexander Wienerberger, which are maintained by his great-granddaughter Samara Pearce: https://samarajadea3bb.myportfolio.com/

We also used photos from James Abbe. More info on the photographer can be found here: https://www.jamesabbe.com/

"Ukraine: Histories of Dispossession and Resilience" by Olga Biochak: https://www.megconley.com/hidden-bread-and-hidden-histories/ 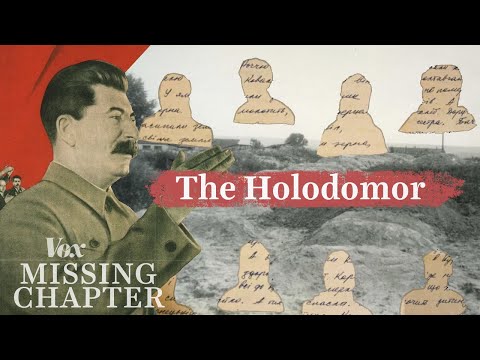 It was a genocide that Russia continues to cover up to this day Subscribe and turn on notifications ???? so you don't miss any videos: http://goo.gl/0...