How To Survive An Alligator Attack

Alligator attacks don't happen often, but when they do, they can be fatal. According to the Florida Fish & Wildlife Commission, there have been 23 fatal alligator attacks since 1973. So, what should you do if you find yourself face-to-face with one of these apex predators?

We talked to wildlife expert Corbin Maxey, who owns two alligators. Maxey told us that even though alligators can get aggressive, they are likely to leave you alone as long as you don't disturb them. He has some simple instructions for what to do if something goes wrong.

Tech Insider tells you all you need to know about tech: gadgets, how-to's, gaming, science, digital culture, and more.
Subscribe to our channel and visit us at: http://www.businessinsider.com/sai
TI on Facebook: https://www.facebook.com/techinsider
TI on Instagram: https://www.instagram.com/tech_insider/
TI on Twitter: https://twitter.com/techinsider

Following is the transcript of the video:

Graham Flanagan: For years, Hollywood movies have shown humans at war with alligators. And their crocodilian cousins. Either they're attacking us, or we're attacking them.

Alligators don't often attack humans. But it does happen, and if one attacks you, what should you do? And perhaps more importantly, what shouldn't you do? American alligators have been around for over 150 million years, since the age of the dinosaurs. But alligators stuck around. There are nearly five million alligators in the United States. They live throughout the southeast, from Texas to North Carolina. But most of them are concentrated here, in Florida. In fact, the sunshine state is home to around 1.3 million alligators, And that's where the majority of alligator attacks take place. The first fatal alligator attack recorded in the United States occurred in 1973 near Sarasota. Since then, 23 more deaths have been reported.

Corbin Maxey: You're more likely to be attacked by a dog, or even killed by a cow than have an encounter, a negative one, with an alligator.

Flanagan: Corbin Maxey is a biologist, wildlife expert, and owner of two alligators.

Maxey: Alligators, they can be dangerous, but just like with wildlife, if you leave them alone, they will more than likely wanna leave you alone.

Flanagan: Sure, alligators can be vicious, technically they're apex predators, albeit very patient ones.

Maxey: They're ambush predators, usually all you'll see, if you're really even lucky to see, 'cause they're so good at camouflage, are the little eyes above the water. They would be eating mammals like raccoons, waterbirds, turtles, and deer on occasion. And they literally will sneak up to their prey and then whack! The prey won't even know usually what gets it, but they are incredibly fast.

Flanagan: Alligators are usually pretty chill, as long as you respect their space.

Maxey: There are rare instances of course, where females might be guarding a nest, and if you're in Florida, or you're in an area where alligators are found, and you come across a nest with a female, she is going to be angry, and she will come after you.

Flanagan: If an alligator charges after you, the first step you should take, is to run. Alligators are quick, and can run up to a speed of 11 miles per hour, but they can't sustain that very long. But what if it's too late? And that gator sinks it's teeth into you? Fight back!

Maxey: You wanna fight back, you wanna give it your all, because that will more than likely allow the alligator to release you, they're gonna realize, oh gosh, I don't wanna deal with this.

Flanagan: Don't try to pry open the jaws. You're dealing with a bite force of three thousand pounds. Some experts say that while fighting back, you should smack the gator's sensitive snout, and also try to gouge the gator's eyes.

Maxey: I feel like that's easier said than done. When you have something sudden happen to you, it's gonna be very hard to be like, oh wait, where are the eyes, you know? So I think the best thing to do would be to fight back, put up a fight, definitely don't play dead. If you play dead, you might become dead.

Flanagan: So, in review, if you're attacked by an alligator, run away. If it's too late, fight back, don't try to pry open it's jaws. Attack the sensitive snout, and gouge the eyes, and definitely do not play dead. But perhaps most important, stay out of their territory.

Maxey: When alligators do attack humans or bite them, it's mainly by mistake, and then usually they'll let go, 'cause they'll realize, ah, this isn't a deer, this isn't a raccoon, this is foreign object, this is not something that I would want to eat.

How To Survive An Alligator Attack 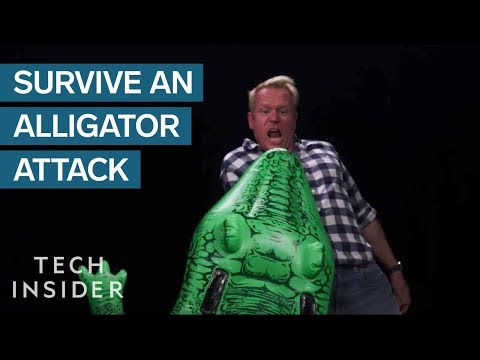 Alligator attacks don't happen often, but when they do, they can be fatal. According to the Florida Fish & Wildlife Commission, there have been 23 fat...