Tom Brady's personal trainer, Alex Guerrero, was reportedly banned from the New England Patriots' facilities. We interviewed Guerrero about his relationship with Brady just two weeks before Bill Belichick restricted the trainer's access.  We reached out TB12 for a comment, but they have not responded. Following is a transcript of the video.

Alex Guerrero: So Tom and I, we got together around 2004. He had sustained an injury and wasn't really responding to traditional therapy he was receiving. So that's when we got together and worked on him and got him better really quick, and we've been together ever since.

Graham Flanagan: What was your background up until that point?

Guerrero: So my master’s is in traditional Chinese medicine. So, you know, that's how — when I graduated school, I really loved sports, and that's how I kind of got into it and developed the technique that's today become known as the TB12 method.

So I went out to where he was and spent three days with him and got it fixed. He never had an issue with it again, after they told me that he 100% needed to have surgery. So I think at that point it really clicked with him, and he's like, "OK, this is really what I'm going to be doing for the rest of my career."

During the course of the season, it's daily. And it's multiple times a day. So we'll get together — do something in the morning, kind of just get everything activated and warmed up and ready for the day. And we'll do pre-practice, where we'll start warm-up and activate all the muscles that he's going to have to use during the course of practice. And then post-practice, we do it again to kind of lock in these muscle-memory patterns from what he was — the way that he was moving during practice.

So yeah. So we come up with all of his nutritional guidelines and protocols — so, you know, what he takes for his smoothie in the morning, to how many times he's going to take a protein shake during the course of a day, to what his lunch and his dinner meals are going to be, how many calories they are, how many of those calories are going to come from plant-based or essential fats or some sort of animal protein. So it just depends on the time of year and what we're trying to accomplish.

Tom and I have worked on it together over the past 12 years. We've been doing things — it's kind of morphed, right, because it is so customizable. What I started with 20-plus years ago, when I first started, to what we incorporate and do now are different.

You know, as I started to work with a lot of the athletes from the rehab perspective side, I would  rehab them, they would go out, and they'd get reinjured. They'd come back, I would rehab them again, they'd go out and get reinjured. And I thought: "Why are they getting reinjured? I need to go watch them move." And so as I began to go out and watch them actually move, I began to see biomechanical imbalances, and I thought: "Oh, OK, so now that's the way he wants to move? I need to train him for those movement patterns." And once I started to do that, athletes stopped getting hurt in that same way. And so that's kind of how it morphed into what it is today. 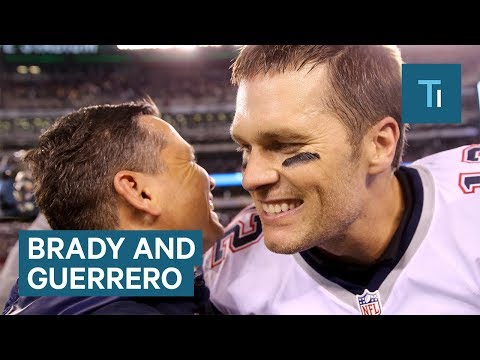