How Warnings About Trump Are Being Silenced | Opinions | NowThis

‘With the silencing of professionals, the public may have been deprived of critical information.’ — Psychiatrist Bandy Lee is exposing how mental health experts’ warnings about Trump were stifled.
» Subscribe to NowThis: http://go.nowth.is/News_Subscribe
» Sign up for our newsletter KnowThis to get the biggest stories of the day delivered straight to your inbox: https://go.nowth.is/KnowThis

In US news and current events today, Dr. Bandy Lee spoke to NowThis News about Trump's mental health and the Goldwater rule.

Lee: 'Is it ethical to speak up about a political figure who is, through the influence of his office, posing a danger to the public?
You may have heard of what is called the Goldwater rule. …You may have heard that it is a rule for professionals not to speak about someone they have not personally examined. But that is only a part of the rule. Here's what the rule actually says.

“... A psychiatrist may share with the public his or her expertise about psychiatric issues in general. However, it is unethical for a psychiatrist to offer a professional opinion unless he or she has conducted an examination and has been granted proper authorization for such a statement.”

The Goldwater rule initially came about because of Senator Barry Goldwater's presidential campaign. A tabloid magazine called Fact surveyed 12000 psychiatrists.
And Even though less than 10 percent of the psychiatrists came back with irresponsibly diagnosing Mr. Goldwater and calling him unfit, the magazine sensationalized the incident. saying over a thousand psychiatrists called him unfit
Subsequently, Mr. Goldwater sued. the magazine and received a large settlement. Even though the APA itself was not sued, it was embarrassed and therefore decided to institute the Goldwater rule.
Psychiatrists don't just have a responsibility to patients. They have as well a responsibility to society. Therefore, in addition to caring for patients, they should take part in activities that improve the community and better public health while caring for society. If asked about a public figure, they should educate the public in general terms, but not diagnose. Diagnosis should occur only with an examination and consent.

The rule was changed to cover not just diagnosis, but any aspect that anyone can observe from the outside, such as speech, affect and behavior. None of that could be commented on as a professional.

That was a change that was made in March 2017. It reinterpreted the rule into something that unethical rule never has been before.
The timing of this change by the American Psychiatric Association shortly after Donald Trump's inauguration, as well as the APA’s dependance on federal funding and pharmaceutical industry support, require consideration.

Now, news programs regularly give the Goldwater rule as a reason for not covering both mental health experts and non experts. This way, professional opinion is made the same as any opinion, the way facts are made, the same as alternative facts.
Many psychiatrists call the new rule a gag order, and many distinguished APRA members, including officers, resigned as result, according to an informal poll. A large majority of psychiatrists disagree with the rule and believe it should be changed.
Why is this important with a new silencing of professionals? The public may have been deprived of critical information at a critical time to be able to protect itself, since knowledge is power.
Suppressing knowledge is a form of control and an essential ingredient to tyranny. We can see this from the general silencing of whistleblowers and journalists.
Given that Mr. Trump's probable mental incapacity and dangerousness were a near consensus among mental health professionals, it might have been important for the public to know about. This behavior is not random and dangerous behavior is often recurrent. Above all, the public seemed to need to hear that mental impairment is real and not just to fabricate. And above all, the public seem to need to hear that mental impairment is real and not just a fabrication or an insult for those who already saw the signs.
I am a strong supporter of the Goldwater rule, which is why I object to changing it in response to political pressure. '

How Warnings About Trump Are Being Silenced | Opinions | NowThis 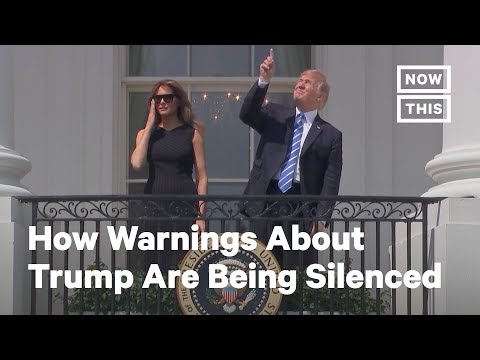 ‘With the silencing of professionals, the public may have been deprived of critical information.’ — Psychiatrist Bandy Lee is exposing how mental heal...