In what critics are describing as “bulldozer justice”, earth-moving equipment is being used to plough into shops and homes in India during operations reportedly targeting Muslim activists behind recent anti-government protests. Demonstrations were held across India in June 2022 after two ruling-party officials made remarks seen as derogatory of Islam’s Prophet Mohammed. Buildings linked to accused protest organisers, including activist Javed Mohammad, were later demolished by excavating equipment. Some claim the actions are examples of humiliation of Muslims under the leadership of India’s ruling Hindu nationalist Bharatiya Janata Party (BJP). Party leader and Prime Minister Narendra Modi has not commented about the recent attacks. India’s Muslim minority accounts for around 14 per cent of the overall 1.4 billion population. 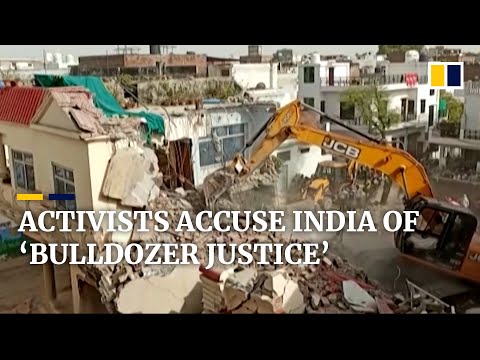 Subscribe to our YouTube channel for free here: https://sc.mp/subscribe-youtube In what critics are describing as “bulldozer justice”, earth-moving eq...