India: Can the farmers' protest be resolved? | The Stream

In this episode, we discuss three of the biggest protest movements of 2020.

India
Hundreds of thousands of farmers have been blocking highways on the outskirts of New Delhi since last month. They are calling for Prime Minister Narendra Modi to repeal a series of laws they say threaten their livelihoods.

The government in September introduced farm bills it said would free farmers from having to sell their produce only at regulated wholesale markets and make contract farming easier. But farmers say this means the authorities will stop buying at minimum guaranteed prices and corporations will push prices down.

The government insists that, while the laws can be amended, it is against repealing the bills. Several rounds of talks have failed to resolve the dispute and solidarity protests are now spreading both inside and outside India.

Poland
Since October 22, people across Poland have been protesting in what’s being called the “Women’s Strike”. The demonstrations were sparked by a court decision that could further narrow access to abortion. Abortion is permitted only if a pregnancy is the result of rape or incest, if the woman’s life is in danger or if the foetus is affected by severe congenital defects. But the Constitutional Court ruled that abortion of any sort was “incompatible” with the constitution.

The government has not made a final decision since the ruling but the protests have morphed into a bigger movement. Demonstrators are now setting their sights on bringing down the ultra-Catholic Law and Justice Party (PiS), which has been in power since 2015. They accuse it of disregarding civil liberties.

Palestine
In early September, hundreds of Palestinians protested in the occupied West Bank and the Gaza Strip, denouncing Emirati and Bahraini normalisation agreements with Israel.

Demonstrators called the deals a stab in the back from fellow Arabs and solidarity protests took place across the world. Palestinian President Mahmoud Abbas reiterated that only an Israeli withdrawal from the occupied territories could bring peace to the Middle East. And on social media, activists used the hashtag #BlackDay.

The deal, brokered by the United States, was touted by President Donald Trump as “peace in the Middle East without blood on the sand.” Since then, Morocco and Sudan have also moved towards normalising relations.

India: Can the farmers' protest be resolved? | The Stream 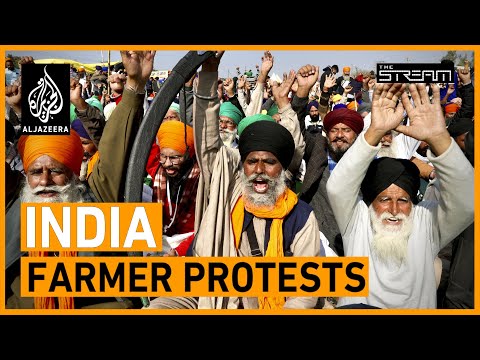 In this episode, we discuss three of the biggest protest movements of 2020. India Hundreds of thousands of farmers have been blocking highways on the ...