'It is economic warfare, and the people that are suffering most… is the civilian population' —This foreign policy expert explains how Pres. Trump's policies have driven Iranian citizens from waving American flags to burning them.
» Subscribe to NowThis: http://go.nowth.is/News_Subscribe
» Sign up for our newsletter KnowThis to get the biggest stories of the day delivered straight to your inbox: https://go.nowth.is/KnowThis

In US news and current events today, Trump is intensifying his economic war on Iran. The victims are everyday Iranians.

Trump ordered the killing of Iran’s top general on Jan 3. In response, Iranian missiles struck U.S. military assets in Iraq. The U.S. then announced further sanctions on Iran. Iran said on Jan 8 it does not seek war but will defend itself ‘against any aggression.’

Iran expert Trita Parsi explains more: 'This is what should be done. First, the United States and Iran should take advantage of the fact that there are several countries that have offered to help facilitate communication and mediate between them. The second step is to listen to the Iraqi people and listen to the American people. The American people want to leave Iraq. They do not want to have their soldiers stationed there. Trump himself promised that he would bring them home. The Iraqi government has asked the American military to leave. It’s an opportunity that actually is a win for Iraq, a win for the United States. [...] Third, Trump must recognize that he’s been misled. The maximum pressure strategy was never designed by these advisers to actually lead to a better deal. It was designed to lead the United States into a war with Iran. If he does not want to have a war, he should step back from that policy and pursue genuine diplomacy. That’s the only way that he can end this conflict, the only way that he can make America safer and advance U.S. national interest.' 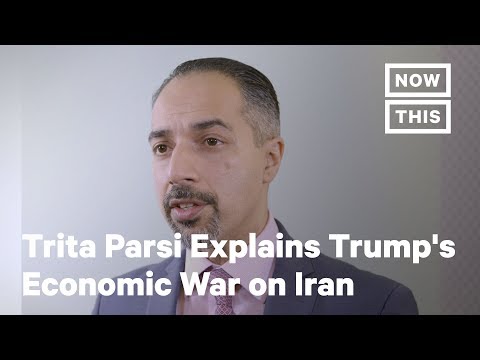 'It is economic warfare, and the people that are suffering most… is the civilian population' —This foreign policy expert explains how Pres. Trump's po...