The issue of immigration continues to divide public opinion around the world, but the Canadian government says it is charting a different course. Canada is regarded as a role model for its acceptance and treatment of immigrants, at a time when many countries are closing their borders and anti-refugee sentiment is high.

When asked, however, why the number of refugees went down from 55,000 to 40,000 in 2017 in the midst of an ongoing and massive global refugee crisis, the country's Immigration Minister, Ahmed Hussen, says: "2016 was an exceptional year because of the Syrian refugee response. We always knew that would be an exceptional year. But if you take out that year and you compare 2017 with our previous years, you will see that the numbers are higher."

With regards to US President Donald Trump's travel ban, Hussen doesn't believe a similar policy would be put forward in Canada.

"I would call it a wrong-headed policy if the opposition in Canada proposed such a measure, but I don't think they would," says Hussen.

In this week's Headliner, we speak with Ahmed Hussen, a former Somali refugee who now serves as Canada's immigration minister, about the country's ambitious immigration policy. 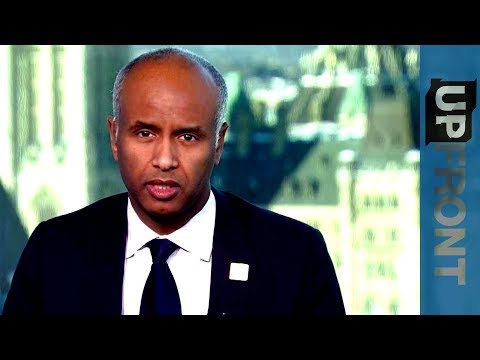 The issue of immigration continues to divide public opinion around the world, but the Canadian government says it is charting a different course. Cana...