Is Europe's far right a threat to democracy? - UpFront

From France's National Front to Germany's Alternative for Germany (AfD), to the neo-Nazis of Golden Dawn in Greece, far-right populists are grabbing the headlines and seem to be on the rise across Europe.

In November, tens of thousands of people joined a nationalist march in Poland, including both Islamophobes and anti-Semites, which erupted in violence. So, are Europe's liberal values under assault, at risk from the far right, or is that an exaggeration? Are some on the left guilty of crying wolf?

"There is absolutely no threat to liberal democracy in Europe," says David Goodhart, author of The Road to Somewhere: The Populist Revolt and the Future of Politics.

"I think there is such a tendency among the kind of, the liberal moral panickers, as I would call them, to regard all expressions of cultural and social loss as some form of xenophobia and racism, and I think this is extremely destructive. And let's talk about, though, what is the legitimate delineation. I mean, I think racism is the obvious delineation. And I think mainstream populist parties are not racist."

Sasha Polakow-Suransky, author of Go Back to Where You Came From: The Backlash Against Immigration and the Fate of Western Democracy, believes a real threat exists.

"I'm not arguing that liberal democracy has disappeared or is disappearing tomorrow, I'm arguing that there's a dangerous trend throughout Europe, and we need to pay attention to it," Polakow-Suransky says.

He adds: "I would argue that white nationalists are a threat to this country, the United States, and to many European countries because they can present themselves as natives who are valiantly defending the homeland against the invading hordes."

In this week's Arena, David Goodhart and Sasha Polakow-Suransky debate whether the rise of the far right in Europe is real, and if the future of liberal democracy is at risk.

Is Europe's far right a threat to democracy? - UpFront 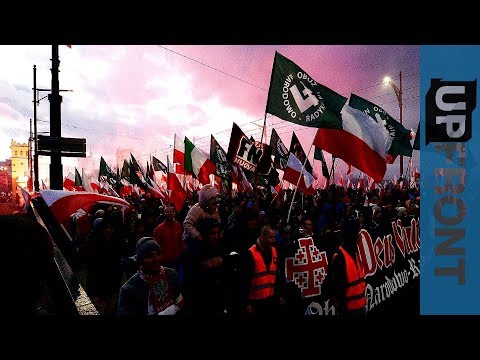 From France's National Front to Germany's Alternative for Germany (AfD), to the neo-Nazis of Golden Dawn in Greece, far-right populists are grabbing t...