Is Somalia's hunger and homelessness crisis beyond hope? | The Stream

An ever-growing number of people across Somalia are leaving their homes to escape conflict and the impact of extreme weather events that have devastated the livelihoods of farmers and herders.

Aid organisations are now urging major action to help hundreds of thousands of displaced people who are at risk of hunger and disease. And with the total number of internally displaced people now at 2.9 million, the International Federation of Red Cross and Red Crescent Societies warns that Somalia is “on the cusp of a humanitarian catastrophe”. The country’s fragile healthcare system is struggling to tackle a rise in COVID-19 cases.

As climate conditions in the Horn of Africa spur extreme weather, farmers and pastoralists have been left in ruin due to their land being battered by cycles of drought and flooding. Tensions between farmers and herders over access to dwindling areas of still viable land now threaten escalate into direct conflict, further spurring the displacement of civilians and exacerbating the humanitarian crisis. Many people have also been forced to flee their homes due to inter-clan violence and the persistent threat of attacks by al-Shabab fighters.

As the crisis deepens, continued friction between political leaders over the running of repeatedly delayed indirect presidential and parliamentary elections is slowing concerted efforts to tackle it.

In this episode of The Stream we’ll look at the slowly unfolding emergency now affecting millions of people across Somalia, and what prospects there are for action to bring relief to those most desperately in need.

Is Somalia's hunger and homelessness crisis beyond hope? | The Stream 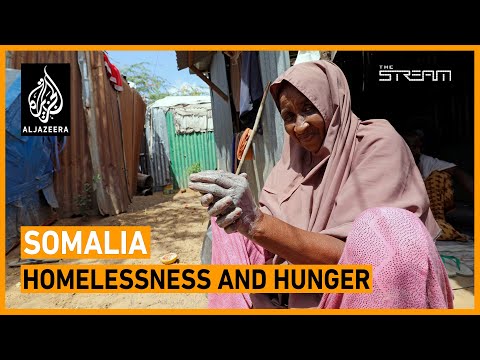 An ever-growing number of people across Somalia are leaving their homes to escape conflict and the impact of extreme weather events that have devastat...