Is the US abandoning its Afghan workers? | The Stream

US President Joe Biden has a month to decide whether he will stick to a February 2020 agreement with the Taliban that commits the US to pull its troops out of Afghanistan. But as the May 1 withdrawal deadline nears, Afghans awaiting Special Immigrant Visas after working for the US government are fearful that a US exit will leave them defenceless against reprisals by the Taliban and its supporters.

Thousands of Afghans have worked for the US government in the years since US forces invaded and began occupying Afghanistan in 2001, holding jobs as interpreters, drivers, security guards, and embassy clerks. But while more than 15,000 Special Immigrant Visas have been issued to Afghan applicants, thousands more Afghan visa petitioners are facing protracted delays in processing and vetting.

Each day spent waiting for an application to inch through the US immigration system is another day where workers and their families are exposed to attack. Hundreds of Afghans who have worked for the US government or international coalition forces have been killed, many while waiting for visas that would have secured their safety.

The situation for US-affiliated workers in Iraq is also dire. While the temporary Afghan SIV programme remains open for applicants, a similar SIV programme for Iraq has not been re-authorised since 2014. Thousands of Iraqis have instead had no choice but to lodge applications through the Direct Access Program, within the U.S. Refugee Admissions Program (USRAP).

Biden in February issued an Executive Order in which he instructed a review and report on the Afghan and Iraqi Special Immigrant Visa programmes within 180 days. But advocates for visa applicants are alarmed that US government action will be too late for US-affiliated Afghans who may face violence in the event of a US troop withdrawal from Afghanistan. Some are calling for Afghan applicants to be evacuated to safe havens.

In this episode of The Stream we’ll meet US advocates helping Afghans and Iraqis caught in limbo.

Is the US abandoning its Afghan workers? | The Stream 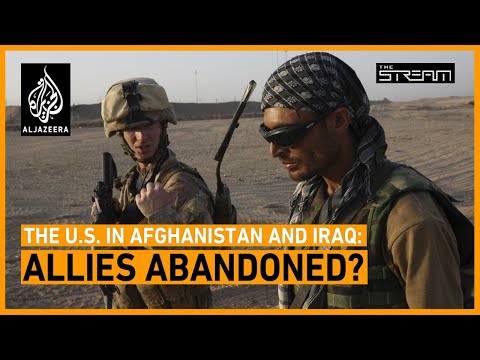 US President Joe Biden has a month to decide whether he will stick to a February 2020 agreement with the Taliban that commits the US to pull its troop...