In just over one month US President Donald Trump will exit the White House and president-elect Joe Biden will move in and begin to lead the country.

The last four years, and the rancorous election that followed, have left behind a deeply divided people. The incoming president has said he intends to heal racial division and halt the relentless march of coronavirus in the worst affected country in the world.

Biden has repeatedly insisted his government will be representative and reflect the nation's diversity. A number of his cabinet appointments have gone to officials from minority backgrounds to the applause of supporters. Critics on the left, though, say his transition team is focusing on the diversity of the selections to deflect criticism of the appointee's political records.

The first 100 days of a US president's term are generally seen as a symbolic benchmark and Biden says the first priority of his administration will be tackling the pandemic. He has already unveiled a three-point plan he says will immediately be put into action: distribute 100 million vaccines, introduce a national mask mandate and get children back to school safely.

As he sets about tackling the pandemic - as well as the economy, racial justice, climate, immigration reform and foreign policy - he will have to work across the aisle with a potentially hostile Republican party and fend off discord between the centrist and progressive wings of the Democratic party.

On this episode of The Stream, we’ll look at the many challenges that lie ahead for Biden and ask what’s achievable, and what may not be, in his first 100 days. 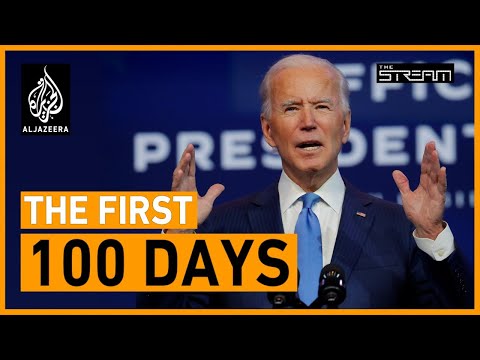 In just over one month US President Donald Trump will exit the White House and president-elect Joe Biden will move in and begin to lead the country. T...